A Woman of Wonder 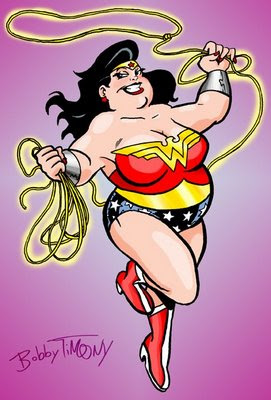 I experienced a horrible nightmare!

I dreamt that I was a man about to be captured by Wonder Woman! Her golden lasso was twirling above her tiara-ed head.

Then suddenly she spotted me - the bad voyeur! She bounded out of the plane and gave chase. That's when my dream turned into a nightmare!

It wasn't Diana Prince who had struggled to get into that skimpy super costume! It wasn't the naked body of a voluptuous Amazon that I had been watching.

It was Rosie O'Donnell!

I only had one chance to survive. I had to change into
Green Lantern
I charged my power ring and recited my oath ...

"In brightest day, in darkest night,
No evil shall escape my sight.
Let those who worship evil's might,
Beware my power - Green lantern's light."

I flew into action and turned my power ring upon the charging behemoth.

"Great Scott!" I cried before expounding several expletives deleted. Her lasso it is golden - it's yellow! My ring , due to a necessary impurity added during its creation, is powerless against anything colored yellow.

I cringed in terror. Suddenly her costume began splitting at its seams. It literally was disintegrating from her body. The terror was gone, replaced with nausea. I was sickened at the sight of her bare skin cascading, influenced no doubt by gravity itself.

Before my eyes her form began to transmute, morphing into a large mass of flesh. Towering above me now loomed the slug-like Jabba the Hut! I was sick, so sick that I was about to hurl ....

I awoke in a pool of sweat! I had been having a bad dream. Bad dream, hell! It was a freaking nightmare! My stomach was on fire. I really did feel like I was going to throw up.

I managed to keep it down, but I had that horrible taste in my mouth. I had never experienced a dream, or a nightmare for that matter, that had actually caused me physical discomfort when I awakened.

Then I realized that it might not have been the dream that had sickened me. You don't suppose that bowl of chili and nachos on the nightstand next to the bed had anything to with it, do you?

Nah. I didn't think so either.

(The drawing above of a hefty Wonder Woman, drawn by Bobby Timony, was lifted from a very funny and original site: BBWW: The Big Beautiful Wonder Woman Blog. Check out the site, I think you'll enjoy it as much as I did.)

No.1148
Curmudgeon responsible for this post: Hale McKay at 9:05 PM

I hate it when I have those kind of dreams.

Wait. I never have those kind of dreams.

Whew. What a relief.

But then, I never have nacho bel grandes prior to bed.

Just the thought of Rosie O'Donnel in tights will give me nightmares for a month...thanks in advance for the memories.