A Sporting Guy Am I 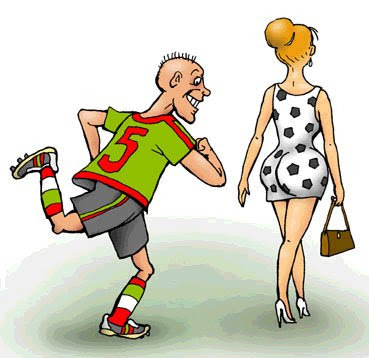 What a satisfying day for a Boston sports fan, in which numbers I can be counted!

The undefeated (7-0) New England Patriots squished the Fish (Miami Dolphins) 49-28! After trailing 3 games to 1, the Red Sox won 3 in a row and knocked off the Cleveland Indians to win the American League Championship Series for the right to go their second Word Series since 2004.

The Boston College Eagles are undefeated and ranked number two in the country. We are excited about next month's start of the Boston Celtics' season. The addition of Ray Allen and Kevin Garnett to hit the floor with Paul Pierce has given us thoughts of going far into the NBA's post season.

None of this excitement has been lost on my wife. Another World Series? Another possible Super Bowl appearance? Now you're telling the Celtics are going to be good again? The next thing - you're going to tell me the Bruins are going be good too!

I tried to make her feel a "little" better when I answered, "Bruins Hockey? Don't worry. I don't watch any so-called sport that's played on a Figure Skating rink!

A friend said to me,"My wife thinks I put football before marriage, even though we just celebrated our third season together."

I'm tired, it's late and I have to work tomorrow. So here's a few sports-related jokes:

Two guys are talking about their boss's upcoming wedding.

The other says, "Well, we have a name for it in my family."

"We call it a football wedding."

The other says, "She's waiting for him to kick off!"

A football coach walked into the locker room before a game, looked over to his star player and said, "I'm not supposed to let you play since you failed math, but we need you in there. So, what I have to do is ask you a math question, and if you get it right, you can play."

The player agreed, and the coach looked into his eyes intently and asks, "Okay, now concentrate hard and tell me the answer to this. What is two plus two?"

The player thought for a moment and then he answered, "4?"

"Did you say 4?" the coach exclaimed, excited that he got it right.

At that, all the other players on the team began screaming, "Come on coach, give him another chance!"

Two old men had been best friends for years, and they both live to their early 90's, when one of them suddenly falls deathly ill. His friend comes to visit him on his deathbed, and they're reminiscing about their long friendship, when the dying man's friend asks, "Listen, when you die, do me a favor. I want to know if there's baseball in heaven."

The dying man said, "We've been friends for years, this I'll do for you." And then he dies. A couple days later, his surviving friend is sleeping when he hears his friend's voice. The voice says, "I've got some good news and some bad news. The good news is that there's baseball in heaven."

"The bad news is that you're pitching on Wednesday."

No.1145
Curmudgeon responsible for this post: Hale McKay at 9:40 PM

Give him another chance! HAHA!

No, no. There is NO GAME on Wednesday. St. Peter must have gotten this wrong,