How could something so beautiful and natural
also be the center of so much controversy?

Mothers have been breastfeeding their babies for eons. It is so with all mammalian life, which also includes humans. It is a natural method of nurturing.

Mother's milk, time-tested for millions of years, is the best nutrient for babies because it is nature's perfect food. - Robert S. Mendelsohn

Why then is it that this natural act is maligned by so many? How can a society that is far from prudish, look upon breastfeeding as offensive? We can talk about it, we can write about it, but let a mother perform the act in public and she is looked upon with disdain.

When an actress takes off her clothes onscreen but a nursing mother is told to leave, what message do we send about the roles of women? In some ways we're so committed to the old madonna-whore dichotomy as ever. And the madonna stays at home, feeding the baby behind the blinds, a vestige of those days when for a lady to venture out was a flagrant act of public exposure. - Anna Quindlen

You may wonder why I, obviously a male, am championing the rights of breastfeeding mothers on my blog. In a word, happenstance.

Today I was witness to, and a party to such a reaction of a mother publicly nursing her infant. Before I recuse myself, I'll explain.

The young woman chose to sit on a bench in a supermarket to nurse her baby. The bench, usually reserved for the elderly while waiting for a bus or a cab, is located at the exit doors of the store. Needless to say, it is the scene of a lot of activity and foot traffic.

The moment she began to suckle the baby there was a commotion. I suppose that it comes as no surprise that most of the complaints were lodged by the women. (One gawking man did complain, but it was in response to his wife's slap against the back of his head.) The first to complain was a woman with two kids in tow who claimed that her young kids should not be subjected to public nudity and such vulgar acts.

How idiotic civilization is! Why be given a body if you have to keep it shut up in a case like a rare, rare fiddle. - Katherine Mansfield

Breastfeeding has long been the subject of art, depicted by even the masters. Yet, by some, it cannot be looked upon in life!

I was in the back of the store and learned of a woman "exposing" herself from an older lady passing me in the dairy aisle. I shrugged it off, thinking it was some "project-trash" who wandered into the store in a drunken or stoned condition. It was only when I arrived at the check-out register with a loaf of bread and a gallon of milk did I see the source of the woman's disgust.

I have witnessed many women nursing babies before. Nearly all of them were discretely covered and exposed very little of themselves. This woman, however, was not so discrete. Beneath an open jacket she was wearing a tube top which had been pulled nearly down to her waist and both of her large breasts were exposed. 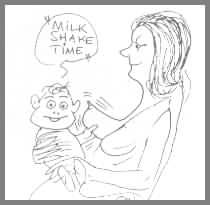 Now her "infant" appeared to be a three-year-old boy who was holding and shaking one breast like some toy while suckling on the other.

Yes, I think breastfeeding is a beautiful natural thing - normally! I have nothing against a woman nursing a baby in public - normally! I'm sorry, but this scene wasn't natural or beautiful, and it wasn't normal. I tried to avert my eyes, but it was hard to do.

There must be reasons why we men are so hipped on breasts as if we'd all been weaned too soon. - Gunter Grass

My opinion is that anybody offended by breastfeeding is staring too hard. - David Allen 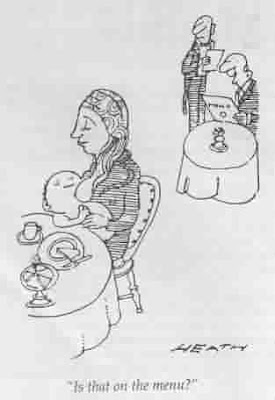 So it came as no surprise to me when a young man, probably in his twenties, stopped in front of her and said, "You have one free, mind if I help myself?" She simply grinned and shaking her head made no move to cover herself.

I was leaving the store behind him. While I was at the register I had been silently formulating something to say if needed or if I worked up the nerve. No, I wasn't planning to say anything chauvinistic or off-color. I was just trying to have something clever to say in case she said anything when I passed. (I had already made up my mind that I wasn't going to turn my head. Hell, if she wanted to flaunt them, I was going to look at them. If that makes me a chauvinist - so be it!)

Sure enough she cupped her breast with her hand, looked me in the eyes and said, "I suppose you want some too?"

The rehearsal at the register had paid off. I shook my head, held up the gallon of milk and said, "No thanks. I prefer mine bottled and pasteurized." 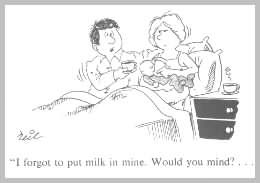 This cartoon reminds me of when my wife was pregnant with our daughter. She chose not to breastfeed, but before the birth she was lactating.

Yep, I held a cup of coffee in front of her and jokingly asked her to "lighten" my coffee.

I still think breastfeeding is beautiful. I really have no problem with it being done in public.

But this woman, in my opinion, went overboard. There was no need to completely bare both breasts in public.

I know some women breastfeed their kids when they get older, but I thought this kid was too old. Again, it is only my opinion.

AS usual, you raise an interesting question. To breastfeed or not?

From this man's perspective you have given the topic a fair hearing.

If all went as you describe, and am sure it did, I am in total agreement.

It's a good thing your wife has a great sense of humor.

i have to agree with you on all points really. i breastfed all three of my children until they were about 18 months old. i did so publickly as well but never ever flashed people. i had no interest in sitting in some smelly uncomfortable bathroom to feed my babies. most folks really didn't even realize i was breastfeeding when i did so. one old couple came over to me when they saw the baby on my lap thinking they could coo over her. it was only when they nearly had their faces on top of the baby that they realized what i was doing and they recoiled. (they moved pretty quickly and the baby was fallign asleep , hence my reluctance to make a sudden move to stop their approach). it can be done very discretely even in public. it's not necessary to whip out an entire breast musch less both of them. also, my children by the time they were not even one year old could hold on long enough to wait to be in a convenient place to feed.

while it's a mother's choice to continue nursing a 3 yr old, a three year old in the USA is certainly not breastfeeding for the sake of nourishment and nutrition anymore and the child certainly could have waited for a little while. there is no reason that woman needed to plop herself in the most heavily trafficked part of the store, completely expose both breasts and feed a 3 yr old.

Allow me to fulfill the chauvinistic or off-color role. If I can look at boobies without slipping them a single then it's a good day. It's an even better day when I have an out like it being 'natural' and all. Bless her heart.

What supermarket was that at? I think I may need some bread and milk too.

I'm waiting for you to post the pics you took with your cell phone camera...we know you did, so come on and post 'em.

When I first saw the title of your post I thought it was going to be about the kind of wine I drank in college :-)

Just goes to show how screwed up we are. There's nothing wrong in breast feeding in public. You're right, some people get upset seeing a exposed breast in public, but on the telly or in a movie nobody gives a shit.
What a twisted society we live in.