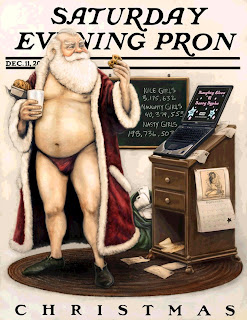 One evening before Christmas after a long day in the toy shop, Santa Claus was enjoying a soothing hot shower. Because he was very strict about remaining faithful to his wife, he occasionally felt the need to seek self-release.

That night was one of those occasions. So it was he succumbed to the urge to exercise his right wrist. Just as he reached a climax, there was a sudden flash of light. At the window he saw a photographer ready to take another picture just as his "Santa-seed" was flying through the air.

Quicky covering himself Santa said, "Hold on a minute, you can't print that! You'll destroy my reputation to all the kids who look up to me."

"This is my winning lottery ticket," said the photographer. "I'll be financially secure for life."

So Santa offered to buy the camera. After lots of negotiation, they eventually arrived at a price of two million dollars.

Santa then dried himself off, dressed, and headed off to the house with his new camera in hand. He met his wife at the door, who spotted the camera. "That looks like a really good camera," she said. "How much did it cost you?"

"Two million dollars!" said the Mrs. Claus. "They must have seen you coming."

Well, I thought it was funny!