I have come to the conclusion that I might be evolving into a cross between the Grinch and Scrooge. 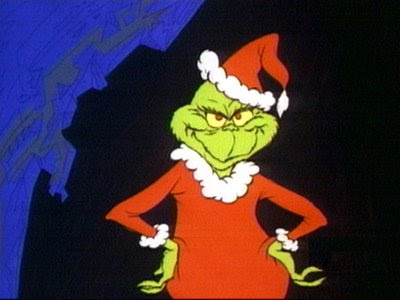 I don't wish to ruin any one's Christmas, ala the Grinch. I'm not walking around espousing "Bah Humbug" like old Ebeneezer. Christmas has just become a grind!

The spirit is there. The disposable funds are adequate. The domestic scene is fine. Everyone is healthy. I'm not depressed. So just what is my major malfunction?

I have put a serious dent, well a fair dent, er maybe I just scratched the surface, okay I haven't gotten much Christmas shopping done at all! I haven't been putting off shopping. It's certainly not for lack of trying. It's not because I have no idea of what to buy - I don't, but that's the normal situation every year.

Do you suppose it has something to do with the fact that we have been hit with three winter storms in less than a week? Yes, that's been a factor. In and of itself, the weather is the cause and not the effect. On my job I get paid on a per client basis. If for any reason, other than at the behest of the client, I don't provide service in a given week, I don't get paid. Ah, but there's the rub - "in a given week."

Whenever possible I am expected to make up any services not provided on said scheduled day within that calendar week. In other words, I have had to work later at night some days and on the weekends. Two weekends in a row, earmarked for my Christmas shopping have become work days. More than half of the individual days have turned into late working nights.

We haven't received any where near record amounts of fallen snow. The problem has been the timing and the nature of the storms. The first storm produced little but manageable snow which froze solid overnight. With ice on the streets, driveways and sidewalks the next storm dumped a foot of the white stuff on top of that. We had just managed to dig out from that (the streets were still a mess)when a weekend storm dropped another six inches on us.

Fulfilling my regular work load and the aforementioned make-ups have been an arduous trial and a taxing strain on my body and my plans. It's been one thing working longer hours and on the weekends, but it's been torture fighting the heavy traffic and trying to find and praying for parking spaces.

As I sit here comitting these lines to screen just before midnight on Saturday 12/22, I am faced with the burden of Christmas shopping tomorrow. Don't the weather Gods realize that wintertime Sundays are supposed to be reserved for relaxing and watching football?

I didn't intend for this post to turn into a weather rant, or to go on about my holiday travails, but I still think I'm about to turn into an amalgam of the Grinch and Scrooge.

This has been Ebeneezer Grinch wishing you a Merry aw, Bah! Humbug! Christmas.

What? You don't just ask your wife to do it for you? I thought that's what all men did. I even had to pick out and purchase my own gift from the husband!

Plus buy my MIL's gift from my FIL!

i hope you survived the shopping expedition today. and i hope that you and yoru family have a very merry christmas without need of visitation from the christmas spirits in the night or a ski down mount crumpet with max your trusty reindog.