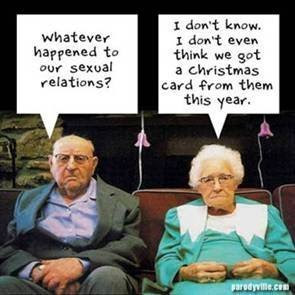 Two women met for the first time since graduating from high school. One asked the other, "You were always so organized in school, did you manage to live a well planned life?"

Her friend asked,"What do four marriages have to do with a well planned life?"

"One for the money, two for the show, three to get ready, and four to go."

A 75-year old man went to his doctor's office to get a sperm count. The doctor gave the man a jar and said, "Take this jar home and bring me back a sample tomorrow."

The next day, the 75-year old man reappears at the doctor's office and gives him the jar, which is as clean and empty as on the previous day.

The doctor was shocked. "You asked your NEIGHBOR?"

The old man replied, "Yep, but no matter what we tried, we couldn't get the jar open!"

An old man went to the social security office to sign up.

He had stood in the line for a very long time until it was finally his turn. The lady behind the counter ask him for identification. He went to get his wallet out of his back pocket and relized he had left it at home. The lady told him that was alright he could just show her his chest hairs and if they were grey she knew he was old enough for social security.

After everything was done there he went home and told his wife how his day went. He told her that he had forgotten his wallet at home and the lady at the social security office just ask him to pull down the front of his shirt and she could tell if he was old enough.

After listening to his story his wife told him if he had dropped his pants he probably could have gotten disability too.

There was this woman who had bags under her eyes and wanted to get them removed so she could look younger. Thus she went to a plastic surgeon. She tells the doctor I can't get rid of these bags please help me.

The doctor says he is gonna try and new experimental technique on her. He will put a crank in the back of her head and when she sees bags under her eyes she's supposed to crank it and the bags will go away.

So she gets this crank put in her head and leaves. It works and works for a while until one day she cant get rid of these bags under her eyes. She cranks and cranks as hard as she can but they just wont go away. So she goes back to the doctor.

She says to the doctor: "Doctor, this was working for a while, but I can't seem to get rid of these bags under my eyes."

The doctor replies: "Lady those aren't bags... those are your tits!"

All she had to say was, "Now that would explain why I have this goatee."

No.1211
Curmudgeon responsible for this post: Hale McKay at 7:13 PM

Man, you have lots more courage, b**g-wise, than I do.