Of Rolexes and the Christmas Spirit 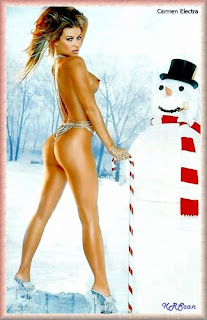 Since those three storms last week in a five-day period, the temperatures have been in the high 30s and low to mid 40s. Although there still remain some mounds of traffic-dirty snow in yards and roadsides, most of it is gone.

As a result we don't need Carmen Electra to help melt the snow. A pity ....

It shouldn't surprise me or bother me, but too many people have no concept of what Christmas is and what it means. (I touched upon that subject in my previous post.)

A man I know, an acquaintance who runs a convenience store, asked me this afternoon what I got for Christmas. I answered with a terse "Some nice practical things." He was persistent and said, "Like what?"

Rather than answer directly I said, "That's not important. I'm more pleased with gifts that I gave to others." I then started rattling off some of the items I gave to my wife, and my daughter and her husband.

He looked at me like I had an extra hole in my head other than the natural ones from nature. Then he said, "Oh, I see. Santa wasn't very good to you. You were disappointed with your gifts."

It was my turn to look at him oddly. "You don't understand, Bill. What gifts I received aren't important. I took great pleasure in watching my family open their gifts. I like seeing their looks of surprise and their smiles. To me that's the most important part of what Christmas is all about."

He shook his head and said, "You are one strange dude." He then held up his wrist and pointed there, "You know what this is?" He didn't afford me the chance to answer. "It's a Rolex."

"Nice." I said to him and then asked, "And what did you give to the missus?"

"What do you care what I gave her? Besides, I don't remember. I gave the kids some extra bucks and had them pick out a few things for her." There was a pregnant pause as another customer came into the store, and bought the paper, a loaf of bread and some cigarettes.

Once again he extended the watch and said, "Do you have any idea how much one of these cost?"

I shook my head and answered, "Not exactly. I know they are expensive though."

He grinned (or was it a sneer?) and said, "I bet this cost more than every gift combined under your tree this year."

I headed for the door and said over my shoulder,"I'm sure it did, Bill. I'm glad you had a good Christmas."

The door closed on his next few words, but I did hear "The best!"

I sat out front for a moment with the engine running and thought to myself, that man falls into that group of poor souls who really don't understand the concept of Christmas. At the least, his understanding and mine are completely different.

A cruel thought entered my mind as I was pulling away.

What if that Rolex he was so proud of ... wasn't genuine? What if it came from the inside of a coat of man standing on a corner somewhere? What if that man whispered to Bill's wife, "Psst, lady. Wanna to buy a watch?"

The cruel thought? I almost hoped that was what happened.

No.1210
Curmudgeon responsible for this post: Hale McKay at 8:51 PM

Too bad he missed the point. My wife and I begin the Christmas gifting early. We get some idea of things we might like to have. Nothing that is a must have. We then peruse catalogs. I am given the mission of identifying things I might like, complete with color and size where appropriate.

She does the same and gives the catalog to me. The fun part is the process. We usually order on line and then await the packages arrival. Once they get here we put them aside and just before Christmas, about a week or two, we put them in to a Christmas bag. We usually use tissue paper as a wrap. It is easier to wrap and to open.

If I am lucky, I will remember something she might have commented about during the year, and make sure I get it. This year it was the complete DVD set of Ken Burn's The War. She never expected it.

Yeah, Hale, you've got the right idea. It should be about the joy we can bring to those we love for sure. And, maybe some joy to others. I feel sorry for Bill. Hopefully, he will wake up some day and see the light.

Thanks for being here.

I enjoy making sure my kids have a good Christmas. Giving is the best part of the holiday.