The Hillary-Billies
"Bubba, load up the truck. I'm a fixin' move back to D.C."

"Careful, Bubba. The last time anyone gotta load of you, that Monica bitch didn't get her dress cleaned! What a pig!"

"Aw come on, I told you I never had sexual relations with that woman."

"Bubba, we been over this a thousand times. How do you explain those stains?"

"She tripped and fell face first into my lap."

"Never mind that. It's no use cryin' over spilt sem ... er milk. We got bigger problems."

"Don't you ever listen to the news, Bubba?"

"Course I do, Tugboat ... er I mean, Loveboat. I heard that Monica just turned 34 the other day. They sure grow up fast, don't they? It wasn't that long ago she was crawlin' around on her knees in the Oval Office."

"Uh-oh! That means we have to result to mud-slingin' and dirty politickin', don't we?" 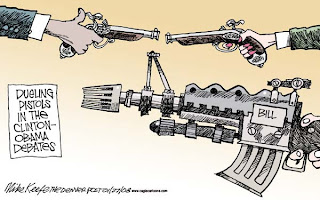 "Of course, doofus! That throne belongs to me."

"I reckon I might as well hit the campaign trail. I'll see if Chelsea May will help."

"Huh? You mean to tell me he has a membership card in NASCAR?"

" (Sigh!) Bubba! Let's avoid the fact that he's black in our speeches."

"You mean to tell me that he don't know? Ain't he ever looked in a mirror?"

"Say! I just got a hum-dinger of an idea! Hillie, may I call you 'Your Majesty'? I'm gonna get us that throne. I'll see you later."

"I just love the sound of that. So, where you off to?"

"I'm going down to see the Tobacconist."

"What are you fixin' to do? Blow smoke on him?"

"Hillie think about it ... you don't suppose that Caroline gal ever tried Bubba's cee-gars before do you?"

LOL...the only thing that dialogue lacks for true credi-Hilbil-ity is a couple of smashed lamps. Otherwise, you nailed it ;)

Loved it. Gives us more.

She does sort of look upon it as a throne, doesn't she? Ugh.