The Justice League of America, that spandex-clad team of crime fighting super heroes, has been battling super villains, aliens from space, mutant monsters, and global threats for over four decades. So frequent and widespread have the dangers become to our earthly existence, one team alone cannot do it all. 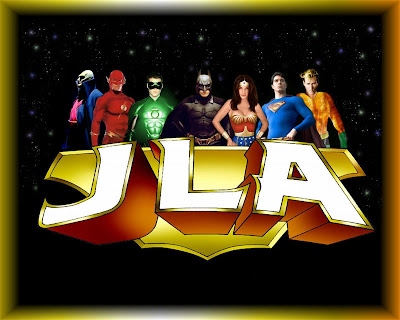 The Original JUSTICE LEAGUE of AMERICA
(left to right):Martian Manhunter, the Flash, Green Lantern,
Batman, Wonder Woman, Superman, and Aquaman
Over the years the original seven heroes have accepted new members into their ranks lest they be spread too thin to be an effective fighting unit. Today there are several chapters of the JLA around the world. Some of these teams operate in such relative anonymity that many know nothing of their existence.

A handful of these units serve as vital backups and emergency replacements for the founding team. To maintain the illusion of an intact team, the JLAers from time to time will draft members of these splinter groups to replace any hero unavailable for duty on certain missions. One such group is:

The Justice League of Appalachia
This select group of Rednecks with powers far beyond those of more intelligent people, impressed the senior chapter with their ability to operate in obscurity. Found in the hills, hollows, shacks and trailer parks of the South the group members wear the same colorful uniforms of their counterparts even though they use different names for their super aliases.

Here are the minutes of a recent mission of the Justice League of Appalachia:

The Case of the Wardrobe Malfunction
Soupman: Let's get this meeting of the Justice League of Appalachia started. First, the roll call.
Wal-Martian Manhunter: Present.
The Flush: I'm here. How y'all doin'?
Green Fog Light: Here.
Batty Man: Here. Let's get this over with. I got a hot date with Catty Woman.
Catfish Man: I'm here too, boss man.
Soupman: Say, that's only five. Two are missing.

(Everyone looks about to see only one empty chair.)

Wal-Martian: One would be you, Soupman. You are chairing this meeting, are you not?
Soupman: Oh, yeah. Brilliant observation, Wal-Martian.
Green Fog Light: Hey! Where's Wonderbra Woman?
Batty Man: We should've noticed her cleavage was absent.
The Flush: Right! I sure notice when she's here!
Soupman: Is there a hail on the emergency beacon?
Catfish Man: No. Besides, I think he's writing this stupid story.
Wal-Martian: She generally is the first to arrive. She must be in trouble.
Soupman: I'll bet she forgot to check the oil in her Invisible Robot Plane.
Batty Man: Ah, her invisible plane. Anyone ever see her change into her costume inside that plane?

(With sheepish grins everyone raises their hands.)

The Flush: I sure hope no one ever tells her she's not invisible inside her invisible plane!
Soupman: They better not!
Green Fog Light: Hell, even when she's dressed...that's sure one sexy outfit she wears.
Catfish Man: Man, I keep waitin' for her to fall out of that top...
Soupman: Oh, it has happened a few times on some of our missions.
Catfish Man: No way! Damn! Where was I?
Batty Man: I think you were on assignment filling in for Aquaman. 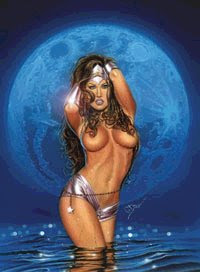 Green Fog Light: We were battling the Arcturian fire-breathing humming birds.
The Flush: That's right, Catfish. Her top caught on fire!
Batty Man: Soupman used his super bad breath to drive them over a lake...
Wal-Martian: I had to keep my distance because of my weakness to fire...
Soupman: Then Wonderbra Woman used her magic lasso to pull them down to the water...
Catfish Man: Hot damn, guys. You're killin' me. When did they fall out?
Green Fog Light: Well, one of those birds shot out some flame that got her square in the chest just before they hit the water.
Soupman: She didn't know it at the time, but the top burned clean off!

(Catfish Man has broken out in a cold sweat and is panting.)

The Flush:You should've seen it, Catfish. In the bright moonlight she waded out of that lake...
Catfish Man: I sure hope one of you bastards took pictures!
Batty Man: Unfortunately my bat camera's batteries were dead.
The Flush: Anyway ... in the moonlight she's knee-deep in the water pulling back her hair ... topless.
Catfish Man: All right! I get the picture.

Green Fog Light: Hey, Soups. Remember that time when we visited the troops in Afghanistan?
Soupman: Yes. She sure entertained the troops that day!
The Flush: Yep. She went to salute the flag and her top slipped all the way to her waist! Those soldiers were cheering like crazy.
Batty Man: Heh-heh! Later it kept slipping down when she shook hands with some of the men.
Catfish Man: Enough! I suppose I was filling in for Aquaman that time too?

(Catfish Man abruptly jumps from his chair and heads for the door.)

Soupman:Where are going, Catfish?
Catfish: I'm going for a dip in the ocean. And when I find Aquaman, I'm going to kick his scaly ass from one side of Davy Jone's locker to the other.

(The emergency Klaxon is activated. Soupman is the first to reach the display.)

Soupman: It's from the Treasurer of the United States. It seems the Chinese are unloading lead onto the world markets. He fears the sudden influx of lead will cause the Commodities Markets to crash worldwide.
Wal-Martian: Why would the Chinese do such a thing?
Soupman: Hold on ... there's more ... Oh no! The Chinese are claiming their lead is contaminated with ...toys! 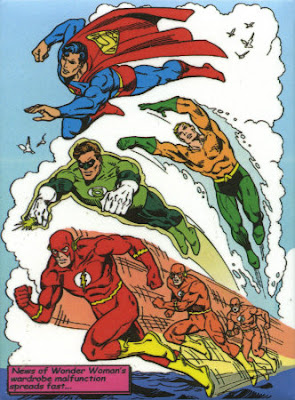 (The Klaxon is activated again. This time Catfish Man reads the display.)

Catfish Man:It's from Wonderbra Woman ... the lead and the world economy has to wait!
The Flush: What is it, Catfish? Is she in trouble?
Catfish Man: Dire trouble! This is an emergency!

Catfish Man: She's just across the river ... I can be there in no time. I'm not missing the action this time!
Green Fog Light: Holy Cow! He's right! It is an emergency.
Soupman: Great Scott! Wonderbra Woman can't get into her costume!
Batty Man: Yahoo! She's having a wardrobe malfunction! Let's go, gang!

(With that our intrepid heroes spring into action. Always ready to save the world, these spandex stalwarts of super herodom will always stand erect to come to the aid of their companions in times of crises - especially when there is a wardrobe malfunction!)

Catfish Man: AAARRRGGGHHH! Go back! Go back!
Green Fog Light:What's wrong, Catfish?
The Flush: He's right. I've been there and back with my super-speed. It's not a pretty sight!
Catfish Man: I'm going to hurl! Then I'm going after Aquaman. That bastard should have filled in for me on this gig!
Batty Man: Are we going to help her or not?
The Flush: She's all yours, Batty Man!

(Soupman activates his super-vision, a combination of his telescopic and x-ray visions, to see inside of Wonderbra Woman's Amazonian domicile.) 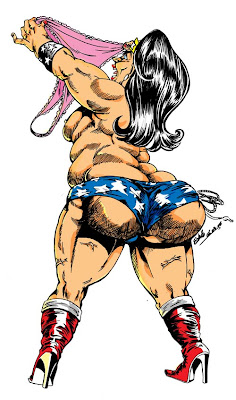 Soupman: Great Scott toilet paper! She's been hitting the bon-bons and Twinkies again! Better call Jenny Craig, this job is too big for...

the Justice League of Appalachia!

Curmudgeon responsible for this post: Hale McKay at 7:10 PM

Hail on the emergency beacon?

You caught that, eh Jack?

Definitely this new team of super friends is too much better than the old one. It has all little details that the other ones missed. lol