A Laugh For What Ails You 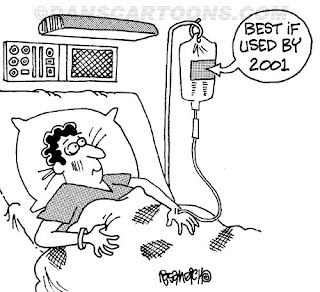 Seeing as I will be spending much of Monday at the doctors, most of which will probably be in the waiting room, here's a handful of doctor-patients jokes.

This 65 year old woman is naked, jumping up and down on her bed laughing and singing. Her husband walks into the bedroom and sees her.
He watches her a while then says, "You look ridiculous, what on earth are you doing?"

She says, "I just got my check-up and my doctor says I have the breasts of an eighteen-year-old." She starts laughing and jumping again.

He says, Yeah, right. And what did he say about your 65 year-old ass?"

She says, "Well, your name never came up."

A man complained to his friend "My elbow hurts I better go to the doctor."

"Don't do that," volunteered his friend "there's a new computer at the drug store that can diagnose any problem quicker and cheaper than a doctor. All you have to do is put in a urine sample, deposit $10, then the computer will give you your diagnosis and plan of treatment."

The man figured he had nothing to lose so he took a sample of urine down to the drug store. Finding the machine, he poured in the urine and deposited the $10. The machine began to buzz and various lights flashed on and off. After a short pause, a slip of paper popped out on which was printed:

You have tennis elbow. Soak your arm in warm water twice a day. Avoid heavy labor. Your elbow will be better in two weeks

That evening as the man contemplated this breakthrough in medical science, he began to suspect fraud. To test his theory he mixed together some tap water, a stool sample from his dog, and urine samples from his wife and teenage daughter. To top it all off, he masturbated into the jar.

He took this concoction down to the drug store, poured it in the machine, and deposited $10. The machine went through the same buzzing and flashing routine as before then printed out the following message:

Your tap water has lead.
Get a filter.
Your dog has worms.
Give him vitamins.
Your daughter is on drugs.
Get her in rehab.
Your wife is pregnant.
It's not your baby - get a lawyer.
And if you don't stop jerking off, your tennis elbow will never get better.

The doctor had just finished examining the very attractive young girl.
Doctor: 'Have you been going out with men, Miss Jones?'

Doctor: 'Are you quite sure? Bearing in mind that I've now examined the sample you sent, do you still say you've never had anything to do with men?'

Miss Jones: 'Quite sure, doctor. Can I go now?'

Doctor: 'Because, Miss Jones, I'm awaiting the arrival of the Three Wise Men.'


One Year to Live

A fellow went to the doctor who told him that he had a bad illness and only a year to live.
So he decided to talk to his pastor. After the man explained his situation, he asked his pastor if there was anything he could do.

"What you should do is go out and buy a late '70's or early '80's model Dodge Pickup," said the pastor. "Then go get married to the ugliest woman you can find, and buy yourselves an old trailer house in the panhandle of Oklahoma."

The fellow asked, "Will this help me live longer?"

"No," said the pastor, "but it will make what time you do have seem like forever."

No.1256
Curmudgeon responsible for this post: Hale McKay at 9:54 PM

Mike, I hope your leg gets better soon! In the meantime, you should find a good spot on the couch and spend some quality time with the TV. Take care buddy!

Great jokes. However, you do seem to have a fixation on doctor jokes. Is this a side effect of your ailment?