A Leg of a Sacrificial Lamb

The eerie sound would resonate for a few moments and stop. Then there would be a cry of creaking boards in a darkened hallway. Finally, there was a low moan of a wounded creature.

To hear my wife's version of my ardous mid-morning treks from the bed to the bathroom, one would think she was spinning a haunting ghost story.

What a way to celebrate a birthday! 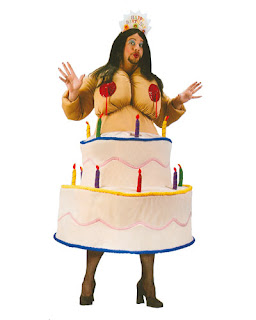 In a pleasant moment of sleep I dreamt of the beautiful girl popping out of a cake! Alas it was a nightmare!

My leg was still elevated when I awoke. It was still red with bacterial infection. Worse yet, it was still painful.

It was still my birthday! I hadn't turned backed the clock. I was sixty years old! I went to sleep fifty-nine. Funny, even though only a few hours had passed, that "Inter-spacial Date Line" had been crossed. There was no looking back.

Rather than be surrounded by family and friends sharing ice cream and cake, my birthday was going to an ignominious one. My days agenda was established by the preceding day and those before it. I would instead be surrounded by doctors, nurses and other patients. There would be no candles to extinguish; no sweets of which to partake.

Today went much smoother that the day before. The hospital personnel weren't nearly as harried. The in-coming emergency traffic was manageable. I arrived at 2 in the afternoon and was through triage by 2:15. I thought I had a chance of being out of there before 4 o'clock at the latest. Under the circumstances, I thought that would be a pretty good birthday gift.

Like I said, it was my birthday. I was finally released at 5:30! Today was supposed to be the fourth consectutive and final day of Intra-venous treatment. That may be so, but it is yet to be seen to be true.

The doctor determined that I had to come in at least one more day, tomorrow for precautionary observation. They may decide that I need another IV then! I have this fear that I could be admitted and have to spend the weekend there.

Tomorrow is another day. Happy Birthday to me?

No.1261
Curmudgeon responsible for this post: Hale McKay at 9:54 PM

Happy Birthday Mike, it does seem a little anti-climatic to have spent 60 years getting to this point only to find your fate rests with one more visit to the hospital, hope all goes well with the sacrificial leg.

Happy Birthday, Mike. I hope that you will get this leg thingy squared away rapidly and will not face any more such illnesses, EVER.

I can almost remember turning 60, but then a senior moment or two interfere.