The Spy is Falling 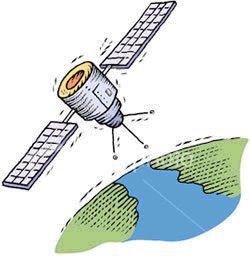 I'm by no means a Rocket Scientist, but it occurred to me that these so-called great minds have missed a golden oppurtunity. Surely, I'm not the only one to have seen the obvious solution.

I'm not down-playing the threat to innocent people down here on earth, because there certainly is a risk factor involved. I ask you, just how many of you have home owners insurance policies protecting you against falling spy satellites. I don't remember that little talking lizard in his commercials saying that your automobile is covered against space debris. I won't bother worrying you about your health and life insurance policies.

The current plan is to blow the thing up with a ship-launched missile before it enters the atmosphere. As I see it, any big thing blown up with a smaller thing will create a whole bunch of littler things. Thus, the more things falling down to earth, they will be spread over a larger area and as such will create the potential for a greater number of insurance claims.

It's a moot point now. The Navy announced that they lauched their missile and succcessfully hit their target, the satellite. It is not known if they destroyed the fuel tanks containing 10,000 pounds of deadly hydrazine. It also unknown how much debris entering the atmosphere will make it to the surface. 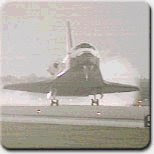 Also in the news, the Space Shuttle Atlantis landed safely in Florida today. WHAT? There was a shuttle already up there in orbit. That's in orbit - as in outer space! That's outer space - as in the same outer space that contains a spy satellite that was free-falling to earth!

It seems to me it would have been possible for the shuttle to retrieve the spy satellite in orbit. It has grabbed the Hubble Telescope before, and this thing was much smaller and in this case less delicate given its state of inoperability. Then with a gentle nudge, the shuttle could have sent it deeper into space or into a higher orbit. Yes, they would have had to deal with it again some time in the future, but at least it would have bought some time and lessened the urgency.

Mr. Rocket Scientist will probably bring notice to a certain matter of fuel. It seems that after launch and once in orbit the space shuttle only maintains enough fuel for its orbital thrusters. He'll then pat himself on the chest and remind me that the shuttles do not risk re-entry carrying fuel.

Well, duh! They just came from a space station - the International Space Station! You mean to tell me you can't store a few five-gallon tanks of gas in a space station? ( I keep a couple in storage in my garage for the snow blower and lawn mower.) Okay! They've already lost a couple of space shuttles and their crews, and wouldn't want another tragedy, I can understand that.

In the end they hit the spy satellite with a missile. Whether or not they totally destroyed it or simply reduced it to thousands of pieces, the world be holding its collective breath for the next several days (weeks?) wondering how much of it will not burn up in the atmosphere.

There are probably some all-nighters already being planned by the executives at Geico, Mutual of Omaha, E-Surance, etc., looking for any loop-holes to deprive claimants.

Now I offer to you my solution that could have been used to avert the emergency. This would have been cost effective and would have saved the world and the insurance companies a lot of grief in the future.

I would have launched a special missile carrying a lot of hot air. The missile would have utilized as extraordinarily large bay doors, the mouth of Hillary Clinton. Upon approach to the crippled spy satellite, the bay doors would have been carefully aligned to open and engulf the craft. A dividend of this maneuver would have been realized immmediately because sound doesn't carry in space. As such, there would been not a single word as the mouth opened and took in the satellite.

Next, thrusters would have been fired to carry the satellite-bearing craft a safe distance away from the earth. I would have saved a lot of money by not loading the missile with heavy and expensive fuel. 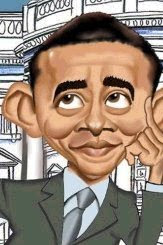 Once the thrusters would have run out of fuel, the second stage of the missile would have come to life as the ears of Barack Obama would have then been deployed as giant solar collectors.

It would have taken less than an hour for the solar cells to have been fully charged. As programmed, the missile would have then been sent onto a week-long trajectory directly into the sun.

Yes, my plan would have not only spared the world from the dangers of a falling spy satellite, but it would have also spared the entire world a whole heap of grief in the years to come.

If I don't say so myself, it is commendable that I was able to come up with this solution all by myself. I did it without a slide rule or scientific calculator, and I did it without benefit of a pocket protector!

No.1266
Curmudgeon responsible for this post: Hale McKay at 8:20 PM

I have another way to guarantee where the satellite will fall: I will climb to the top of Green Mountain (inhabited around the base, but not along it's expansive top), at the summit, and hold aloft my extended middle fingered salute to the Clinton Legacy. The satellite is sure to land right where I stand ;)

And you came up with this idea all by yourself? Wow!

I checked my insurance policy and the only falling objects I'm protected against is a ficus tree. :-)

What we gonna call this move of yours? No name? Then how about:

"Huckabee" I mean, nobody else is making good use of that name.

Wow, your protected from a falling ficus tree? That's more than I'm protected for.

Yep, all by my lonesome.

Your sacrifice would be too great for such an insignificant legacy.