I got caught up in all the NCAA playoffs which started today. My bracket pool close at hand, I settled back in my recliner and watched some hoops. As a result of the basketball games, today's post is one of those thrilling masterpieces: The Old "Clear Out the E-mail Box" Post. 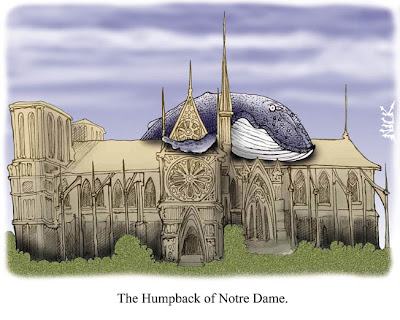 Two whales, a male and a female, are swimming happily around in the ocean when they come upon a boat. On seeing the boat, the male says, "Hey, I've got a great idea! Let's swim up under that boat and blowout really hard through our blowholes!"

The female agrees and they swim up under the boat and blow out, capsizing the boat and sending hapless sailors into the briny blue.

As they are swimming away, the male says, "Wow, that was fun, wasn't it? Hey! I've got another idea! Let's swim back there and eat all the sailors!"

To which the female, exasperated, replies, "Look, I agreed to the blow job, but I'm not swallowing any seamen."

A little girl was talking to her teacher about whales. The teacher said it was physically impossible for a whale to swallow a human because even though it was a very large mammal its throat was very small.

The little girl stated that Jonah was swallowed by a whale. Irritated, the teacher reiterated that a whale could not swallow a human and that it was physically impossible.

The little girl said, "When I get to heaven I will ask Jonah". The teacher asked, "What if Jonah went to hell?"

The little girl replied, "Then you can ask him."

George and Laura Bush are at the Washington Nationals home opener. They are sitting in the first row, with the Secret Service people directly behind them. One of the Secret Service guys leans forward and whispers something to Dubya.

At first, the President stares at the guy, looks at Laura, looks back at the agent, and shakes his head "no". The agent then says, "Mr. President, it was a unanimous request of the entire team, from the owner of the team to the bat boy."

George hesitates... but then begins to change his mind when the agent tells him the fans would love it! He reminds Dubya of his sinking popularity numbers and a public appearance could help him. Bush shrugs his shoulders and says, "Oh-Kay! If that is what the people want."

" C'mere Laura, baby..." With that, he gets up, grabs his wife by her collar and the seat of her pants, lifts her up, and tosses her right over the wall onto the field. She lands face first into the dirt near first base. She gets up kicking, swearing and screaming, "George, you "!^$#@&!"

The crowd goes absolutely wild. Fans are jumping up and down, cheering, hooting and hollering, and high-fiving. Dubya is bowing, smiling and waving to the crowd.

He leans over to the agent and says, "How about that! I would have never believed how much everyone would enjoy that!"

Noticing the agent has gone totally pale, he asks what is wrong. The agent replies, "Sir, I said they want you to throw out the first Pitch .."

Tomorrow there will be another 16 games.

LOL...not a follower of basketball (see hOOPs, an earlier post in my blog), I'll settle for the whale jokes ;)

That's a rich pitch. I love it.