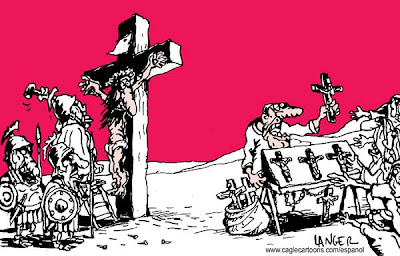 It was a good Friday. Business was good. At the foot of the hill in the shadow of three crosses, Mosche Goldberg was having a good day. He was only trying to make a living; all he wanted was to put bread, unleavened bread on the table.

Caesar Augustus Ragucci was in charge of the Roman soldiers who had carried out the execution of the Jewish Rabbi. He looked with disdain upon Mosche. He couldn't understand how the man could try to turn a prophet-profit on the death of the man they had once called the Messiah. Caesar was not one to overlook a financial opportunity of his own,however. He thus levied a tax on Mosche's sales.

Mosche looked upon the hill with equal disdain at Caesar. He saw the Rabbi's robe draped over the Roman's shoulder. Mosche had watched the Romans gambling for the clothing, high school class ring, and even the gold fillings from the teeth of the slain man. Caesar had taken three cards and had filled an inside straight to win the robe. 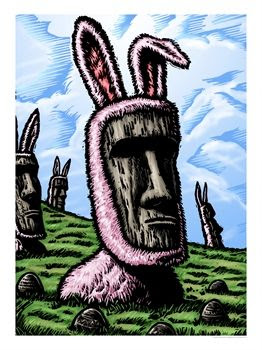 Caesar, fearing there would be unrest because of the crucifixion, decided it was time to take an overdue vacation. He had always wanted to see the exotic paradise called Easter Island. When he saw the enormous statues wearing pastel rabbit suits he was struck with a historic idea.

When he returned from his trip, he sat down and wrote a decree using a quill pen on some papyrus paper. While penning the document he made a few mistakes. He cursed and wished somebody would hurry up and invent a spellchecker for papyrus documents, or at least come up with an ink eraser.

Mosche was one of the first to read the decree when it was posted next to a large sign that read "Post No Bills." To him and his neighbors, it was good news and they rejoiced. The decree stated that there would be a holiday honoring the martyred Rabbi and it would be called Easter. The man would henceforth be known as the Easter Rabbi.

To his horror, Caesar later learned that he had not corrected all of the errors he'd made on the original document. He had inadvertently scribbled a letter "t" after 'Rabbi.' It was too late, the people had already adopted and embraced the "Easter Rabbit" as a symbol of honor for their beloved holy man. By the following year a man would be chosen to dress up in a rabbit costume and march through the streets carrying a basket of goodies to be distributed among the people.

Until his death years later, Caesar often wondered how different things might have been if the people had been honoring the Easter Rabbi as he had intended, instead of a silly rabbit. He visualized that the basket of goodies, which had evolved into colored eggs, jelly beans and gummy worms, would have been replaced with scriptures and promises of salvation and eternal life. The resemblance of that letter "t" to that of a cross was not lost on him.

Neither Caesar Augustus Ragucci nor Mosche Golberg would ever live to realize their two important contributions to world economy - the Easter Bunny and the commercialization of holidays for many a millennium to come. They could have not imagined that their legacies would live on long after they were gone. Ascendants of the Caesars would found hotels, casinos and even a chain of pizza shops. As for Mosche Goldberg, his family name would live on because of one in the distant future who would become a famous artist, cartoonist and inventor by the name of Rube.

(This has been a parody and in no way is intended to offend anyone of the Jewish or Christian faiths. It is intended only as a light-hearted, tongue-in-cheek observation of how the commercialization of Easter has in some part clouded the true meaning of that holy celebration: the death and resurrection of Jesus Christ.)

Have a Happy Easter, everyone. I hope you don't have ...
a Bad Hare Day.

No.1296
Curmudgeon responsible for this post: Hale McKay at 8:36 PM

What a novel idea.

Proof -- if any wuz needed -- that the failure of simple proofreading could change history with a simple typo.

I never thought of it before!

Happy Easter to you and yours :)

Once again a post was born from one single image - the political cartoon that opened this parody.

Apparently Caesar never learned that he should always "cross the t's and dot the i's" when authoring important documents.

...And a Happy Easter to you and yours also.

Reminds me of that old twisted joke...

Silly rabbi, kicks are for Trids.

I don't know why I ever connected the rabbit and rabbi for Easter! I wish I had thought of this. A fine story. Happy Easter!

Yeah, Hale, if Caesar had done his eye crossing and t-dotting, he might be known for a famous pizza chain, and not an invalid calendar and the Id-should-ortas of March, et tu?

I came close to trying to figure out a way to work that joke-pun into this post. Thankfully I couldn't find a way tow weave it in.

Hapy Easter to you and the girls!

I thinik Caesar et tu pizzas that day before he ran into Brutus and friends.