Martian Off to War 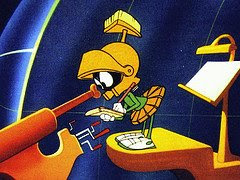 I love the little guy. If I were to be reincarnated as a cartoon character, I think I'd want to come back as him.

In many ways I can relate to him. His schemes, although grandiose, always seem to backfire. He's the Wiley Coyote of outer space.

Essentially a loner, he yearns for glory and attention. Whether he sets out to conquer or to blow up the Earth, it is in the name of his home planet Mars. All he wants is to accomplish his mission and to live his life. Unfortunately, his mission and life keeps getting in his way.

Inside, I'm a bit of a loner too. I like attention, but I have to draw it upon myself. I found a long time ago that I could get attention by doing and saying funny things. I found more comfort in overt humor than allowing myself to exist in a shell of forced seriousness.

I guess there's no room for an extrovert in an introverted soul. If I were an extrovert, who knows, I might have been a stand-up comedian! If I had been more out-going I might have succeeded in achieving some of my school days dreams. I aspired among many things, to be a writer or a journalist. I imagined that with my artistic talents I would someday become a syndicated cartoonist.

Only by suppressing an awkward shy nature, supplanting it with humor, was I able to secure many friends over the years. Otherwise, I would have become the quintessential wallflower. Yet, I take pleasure in sitting quietly on the sidelines - listening and watching. It wasn't always easy being one moment the center of attention and the next the person in the corner wearing the lampshade.

When I was younger Marvin the Martian was my favorite cartoon character and he still is to this day! The bravado with which he carries himself as he aims his ray gun at those who oppose him is not unlike the humor with which I choose to arm myself. While Marvin's ultimate weapon of choice is the Iludium Q-36 Explosive Space Modulator, I'm equipped with only humor for ammunition.

I find my bravado behind the screen of a monitor, secure in the anonymity it offers. There, I can be the writer I always wanted to be. There, I can also be a comedian, albeit a "sit-down" one. There, I can blast through the barriers I had built around myself so long ago.

Somewhere along the way, this Blog has actually become therapeutic. I find myself more accessible. I'm more open and less standoffish in public now. In no small measure, it has been the readers who visit here who have helped give the one thing I had been lacking all these years - confidence.

I know there isn't much humor if any in today's post, but sometimes it just feels good to unwind and to reflect.

Who knew that Blog readers were doctors?

It is most fortunate that a Blog a day does not keep the doctors away!

Were I able to be a cartoon character, it'd have to be the Road Runner. Speed, brevity, concise diction, always one step ahead of a stumble-bum coyote.

It takes courage to admit one's foibles. To do it publicly is even more so.

Your writing skills are enviable. Your humor is priceless. Your ability to download the cartoons to your postings is spot on.

However, a challenge seems appropriate. Is it possible for you to sketch your cartoons and scan them into your blog? Just a thought.

That is probably one of the reasons I like teaching so much, I get to stand/sit/parade/lie down in front of folks and help them discover things about themselves.

So, old chap, keep up your good works. I look forward to visiting this site and to recognize your atavar on my site.

BTW, I could hear Marvin as he spoke about his favorite weapon. He had a unique way of pronouncing mod-u-la-tor'.

perhaps not the most humorous post but i always enjoy these little reveals when the veil slips a bit and we see the man behind the blog. thanks for sharing your heart with us a bit.

Thank you for the kind accolades, Jack.

As for your challenge - I do plan to do just that one day. I even have a comic strip I used to draw about my wife's poodle years ago, called "Poodle Doodles." I lost interest in it shortly affter the dog died.

Perhaps I could resurrect it - but of course, if I posted say one strip once a week, I have well over a year's worth of the strip.
That might give incentive to keep it going in memory of the dog.

My printer is on the way out and I have been looking at the printers out there and have decided I will probably buy a laser printer with a built in scanner and copier and also a photo processor.

When that day comes, I assure you that I will be scanning my own drawings, cartoons, and maybe even photos for use on my blog.

Thank you so much.

I have let the veil slip from time to time. It does feel good to do so too.

I agree with you in that I also like those insertions by bloggers about the "private" them.