SUBTITLE: Why Do Fools Fall in Bed?

A man was complaining to a friend: "I had it all; money, a beautiful house, a big car, the love of a beautiful woman; then, Pow! it was all gone!"
~~~"What happened?" asked the friend.
"My wife found out..." 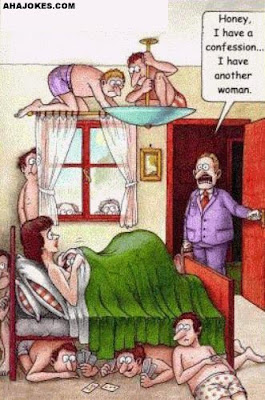 A married man was having an affair with his secretary. One day, their passions overcame them and they took off for her house, where they made passionate love all afternoon. Exhausted from the wild sex, they fell asleep, awakening around 8:00 pm. As the man threw on his clothes, he told the woman to take his shoes outside and rub them through the grass and dirt. Mystified, she nonetheless complied. He slipped into his shoes and drove home.

"Where have you been?" demanded his wife when he entered the house.

"Darling, I can't lie to you. I've been having an affair with my secretary and we've been having sex all afternoon. I fell asleep and didn't wake up until eight 'clock."

The wife glanced down at his shoes and said, "You lying bastard! You've been playing golf!".

There was a middle-aged couple that had two stunningly beautiful teenage daughters. The couple decided to try one last time for the son they always wanted. After months of trying, the wife finally got pregnant and sure enough, delivered a healthy baby boy nine months later. The joyful father rushed into the nursery to see his new son. He took one look and was horrified to see the ugliest child he had ever seen.

He went to his wife and told her there was no way he could be the father of that child. "Look at the two beautiful daughters I fathered!"

Then he gave her a stern look and asked, "Have you been fooling around on me?"

The wife just smiled sweetly and said, "Not this time!"

A mortician was working late one night. It was his job to examine the dead bodies before they were sent off to be buried or cremated. As he examined the body of Mr. Fuller, who was about to be cremated, he made an amazing discovery. Fuller had the longest private part he had ever seen!

"I'm sorry, Mr. Fuller", said the mortician, "but I can't send you off to be cremated with a tremendously huge private part like this. It has to be saved for posterity."

With that, the coroner used his tools to remove the dead man's scaling. He stuffed his prize into a briefcase and took it home. The first person he showed it to was his wife. "I have something to show you that you won't believe," he said, and opened up his briefcase.

A woman was in bed with her lover when she heard her husband opening the front door. "Hurry," she said, "stand in the corner."

Then she quickly rubbed baby oil all over him and then dusted him with talcum powder. "Don't move until I tell you to," she whispered. "Just pretend you're a statue."

"What's this, honey?" the husband inquired as he entered the room. "Oh, it's a statue," she replied nonchalantly. "The Smiths bought one for their bedroom. I liked it so much, I got one for us too."

No more was said about the statue, not even later when they went to sleep. Around two in the morning, the husband got out of bed, went to the kitchen and returned a while later with a sandwich and a glass of milk.

"Here," he said to the statue, "eat something. I stood like an idiot at the Smiths for three days and nobody offered me as much as a glass of water." 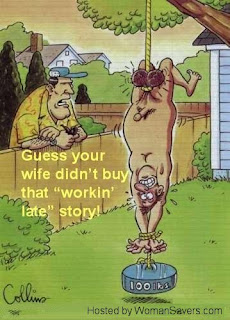 A man walks into a night club one night. He goes up to the bar and asks for a beer. "Certainly, Sir, that'll be 1 cent." "One Cent?", exclaimed the man.

So the man glances over at the menu and asks, "Could I have a nice juicy T-bone steak, with chips, peas and a fried egg?"

"Certainly Sir," replies the barman, "but that comes to real money."

"How much money?" inquires the man.

"Four cents?", exclaimed the man. "Where's the guy who owns this place?"

The bartender replied, "Upstairs, with my wife."

The man says, "What's he doing upstairs with your wife?"

The bartender replied, "The same thing as I'm doing to his business."

Jake was dying. His wife, Becky, was maintaining a candlelight vigil by his side. She held his fragile hand, tears running down her face. Her praying roused him from his slumber He looked up and his pale lips began to move slightly.

"Becky my darling," he whispered.

He was insistent. "Becky," he said in his tired voice, "I have something that I must confess."

"There's nothing to confess," replied the weeping Becky, "everything's all right, go to sleep."

"No, no. I must die in peace, Becky. I ... I slept with your sister, your best friend, her best friend and your mother!"

"I know, my sweet one." whispered Becky, "Now hush and let the poison work."

No.1305
Curmudgeon responsible for this post: Hale McKay at 7:33 PM

What a great way to start the week. Thanks for the laughs.