What began as a joyride through the primaries and caucuses of America, has quickly turned into a vicious battle of wits between Hillary Rodham Clinton and Barack Hussein Obama. Unfortunately, in a battle of wits both of them are unarmed.

When it comes mud-slinging and name calling, however, both have been packing serious firearms from their arsenals. Their weapons of mass distraction have been yielded to draw attention to their opponent's shortcomings, thus down-playing their own. It is ironic that it is their shortcomings that have provided comic relief to an otherwise boring Democratic race.

I was trying to think of a good reason that America should elect Hillary Clinton as the next President of the United States. All I could come up with was that she'll be bringing back all the White House property she absconded when she was last there. 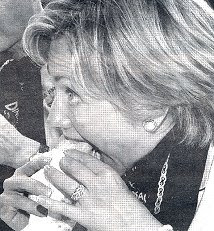 While she was on the campaign trail in a small New Hampshire town, Hillary was honored to learn that a popular local restaurant had named a sandwich after her.

She entered the establishment and ordered the Hillary Sandwich. While she's waiting for the sandwich to be prepared she asked, "What's in the sandwich?"

The man behind the counter replied, "Mostly a lot of baloney."

Hillary was finishing up a day as Senator for New York when the Devil suddenly appeared in her office and made her an offer...

"I am here to offer you a deal," the Devil said. "I will give you unlimited wealth, even more power, and a media that will pander to yo 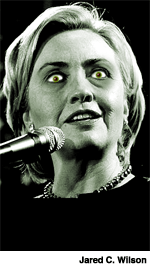 In return, all I ask for is your soul, the souls of every member of your family, and the souls of all your constituents."

Hillary pondered for a moment and then asked, "Unlimited wealth and power?"

"A pandering media?" she asked.

"They'll fall over themselves to support you, no matter what you say or do," the Devil assured.

"And you want my soul, my family's souls, and the souls of my constituents?" she asked.

"Yes. All of them," the Devil answered.

Hillary was deep in thought for a moment, then finally spoke:

Talk about putting the wagon before the horse ...

Hillary has already commisioned an artist to paint her official Presidential picture to be hung up along with those of our former Presidents.

When advised that it was inappropriate not only to pose for the painting before being elected but to also represent herself as royalty, Hillary said, "I was born to sit on the White House throne!"

Hillary and the Fortune Teller

During a recent publicity outing, Hillary sneaked off to visit a fortune teller of some local repute. In a dark and hazy room, peering into a crystal ball, the mystic delivered grave news.

"There's no easy way to say this, so I'll just be blunt: Prepare yourself to be a widow. Your husband will die a violent and horrible death this year."

Visibly shaken, Hillary stared at the woman's lined face, then at the single flickering candle, then down at her hands. She took a few deep breaths to compose herself. She simply had to know. She met the fortune teller's gaze, steadied her voice, and asked her question, "Will I be acquitted?" 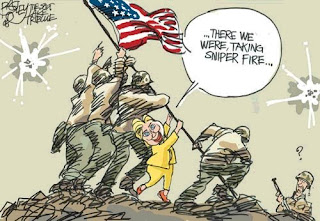 Then there is the matter of Hillary the war hero...

Well Hillary, you sure are under fire now, aren't you? Sorry, there'll be no Purple Heart for you. You'll have to make do with a red face.

Bill Clinton was walking along the beach when he stumbled upon a Genie's lamp. He picked it up and rubbed it and lo-and-behold, a Genie appeared. Bill was amazed and asked if he got three wishes.

The Genie said, "Nope...Due to inflation, constant downswing, low wages in third world countries, and fierce global competition, I can only grant you one wish. So...What'll it be?"

Bill didn't hesitate. He said, "I want to be remembered for bringing peace to the Middle East, instead of that other stuff with Monica, and Jennifer, and the rest of those women. See this map? I want these countries to stop fighting with each other."

The Genie looked at the map of the Middle East and exclaimed, "Jeez, Fella! These people have been at war for thousands of years. I'm good, but not THAT good. I don't think it can be done. Make another wish."

Bill thought for a minute and said, "You know, people really don't like my wife. Even though she got elected, they call her a carpetbagger. They think she's mean, ugly, and pushes me around. I wish for her to be the most beautiful woman in the world and I want everybody to like her. That's what I want."

The Genie let out a long sigh and said, "Lemme see that map again."

Long Live The Queen
No.1304
Curmudgeon responsible for this post: Hale McKay at 8:21 PM

"Inevitability" has its drawbacks, eh?

I love the sandwich.

So....I'm getting the idea that you're not too fond of old Hillary. Correct me if I'm wrong...
LOL

Always a pleasure to "hear" from you.

I love her! She's the greatest thing since ... Dubya!