Green, green, it's green they say
On the far side of the hill.
Green, green, I'm goin' away
To where the grass is greener still.
-New Christie Minstrels

Although Elmer "Len" Dresslar, Jr., died Oct. 16, 2005 at the age of 80, his baritone voice can still be heard as the Jolly Green Giant. The commercials for Green Giant products aren't seen nearly as often now, but his "Ho-Ho-Ho" was once as familiar as that uttered by Santa Claus.

I suspect that the same special interest group that decried Santa's jolly laugh, has also spoken against up against the Green Giant. I'm sure (sic) that they were correct in their assertions that this icon was calling every woman in America a "HO."

I digress. The Jolly Green Giant was mentioned only because of his color, the color green. Green is in! Isn't it? 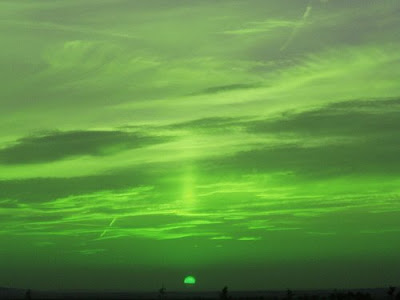 It seems to me that the whole world is turning green. Rather, there are those whose "crusades-du-jour" boomerang between global warming and organic foods and products. Don't get me wrong, their causes are worthy.

All I want to know is ... who gave the Vegans and Greenpeace the right to decide what foods I can and cannot eat and which products I can and cannot use? Normally those kinds of intrusions upon my choices and tastes would have me "seeing red." So why am I seeing green?

Check out the next five dollar bill to be issued:

Oil, it's the life blood of our planet. Is our excessive use of it to blame for global warming? Perhaps, and perhaps not. Remember the "hole in the ozone layer" debates? Guess what, there is no such hole! It's been determined that the density of the ozone layer changes in cycles, probably caused by sunspot activity. Where are those sign-toting save-the-world protesters now? Why weren't the findings afforded as much publicity as the fears? Because it was not in their best interest to admit they might have been wrong.

They didn't wish to appear to have egg on their faces. Well, I say they can have some green eggs and ham rubbed in their faces! Of course they didn't have time to admit they were wrong, they had to hustle to find a new cause.

Greenpeace's efforts to save the whales were valiant and to some degree quite successful as the the numbers of these aquatic mammals have been increasing. Their work to save our rain forests is a noble one, but only time will tell if they are successful. Their latest target is Unilever, the makers of Dove. Dove makes its soap with palm oil, which is bought from companies destroying the rain forests of Indonesia to produce it.

It is a known fact that trees absorb carbon dioxide and in turn give off oxygen which is necessary for life as we know it. Does the destruction of the tropical rain forests contribute to global warning? Perhaps, and perhaps not. Again scientists have evidence that global warming, like the density of the ozone layer, is a cyclical process. The temperatures of our planet apparently rise and fall in cycles of hundreds of thousands of years, the last such event resulting in the last Ice Age.

If the Vegans have their way, we'll all someday be eating only bean sprouts and tofu. When that day comes this planet Earth, the third rock from the sun will be inhabited by a race of weak protein-deficient beings. We'll be more susceptible to diseases and sicknesses than ever before. Is this why even now that viruses and bacteria are mutating and become more virulent? Perhaps and perhaps not.

If the "Greenies" have their way, what will be the outcome? Will Bloggers also have to become green? Will be limited in our subject matter to all that is green? Will we all have to use green backgrounds on our sites and to post only in green fonts? 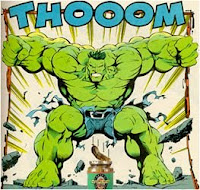 I say that Bloggers will not stand for that. That would be infringing upon our rights to freedom of speech and expression, indeed the freedom of the press.

I think I would be speaking for all Bloggers when I say, "That would make us very angry. They wouldn't like us when we get angry."

Yes, they'll all come to see me
In the shade of that old oak tree
As they lay me 'neath the
Green, green grass of my gnome.
- Tom Jones (with apologies)

No.1328
Curmudgeon responsible for this post: Hale McKay at 8:26 PM

I think they meant
"Every day and in every way
I pray for some green green grass in Nome" (Alaska), where one can't tell a snowdrift from a polar bear, until it rears up and eats you.

Which PETA has no problem with, BTW...

I bet if PETA were to be on the receiving end of the surprise bear visit they would have something unique to say about that.

However, we do need to be aware of the impact the increasing population has on the earth. Just imagine the increased amount of methane gas that will be released because if it. Maybe that is just too much.

Hale, thanks for stopping by FuzzieChadsRule. I have really enjoyed the site and thought you might as well.

PETA (Polar bears Eating Tasty Aleuts) - now how did I forget to include them in the post?

Of course the over population of the planet is an often overlooked factor in regards to the planet's woes.

Thanks jack, for the tip to the Fuzzie Chads Rule site. It's different with a unique approach.

Jack: where is American ingenuity and innovation? Instead of bemoaning increasing methane from human poopulations, let us seize the day and the oppooptunities therein: capture and synthesize methane into an energy source that will run cars...trucks...boats..aircraft...electricity...gas (somewhat redundant)...no more wars over oil, or one earthquake near a nuke facility and all the rabbits grow to 6' tall with six inch fangs...energy aplenty for all! The only tiffs in the world would be olfactory, and there's Glade Plug-ins for that...

I return you now to your regular subject...

Now that's one best in-depth cover-all-the-bases solutions to the energy problem I've heard in a while.