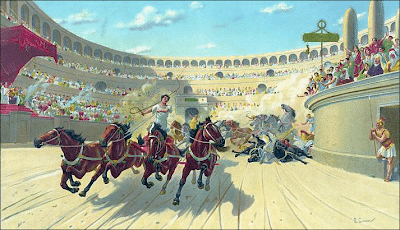 Translated from Latin scroll dated 2BC --

Are you still working on the Y zero K problem? This change from BC to AD is giving us a lot of headaches and we haven't much time left. I don't know how people will cope with working the wrong way around. Having been working happily downwards forever, now we have to start thinking upwards. You would think that someone would have thought of it earlier and not left it to us to sort it all out at this last minute.

I spoke to Caesar the other evening. He was livid that Julius hadn't done something about it when he was sorting out the calendar. He said he could see why Brutus turned nasty. We called in Consultus, but he simply said that continuing downwards using minus BC won't work and as usual charged a fortune for doing nothing useful. Surely we will not have to throw out all our hardware and start again? MACROHARD will make yet another fortune out of this I suppose.

The money lenders are paranoid of course! They have been told that all usery rates will invert and they will have to pay their clients to take out loans. Its an ill wind ......

As for myself, I just can't see the sand in an hourglass flowing upwards. We have heard that there are three wise men in the East who have been working on the problem, but unfortunately they won't arrive until it's all over. I have heard that there are plans to stable all horses at midnight at the turn of the year as there are fears that they will stop and try to run backwards, causing immense damage to chariots and possible loss of life. Some say the world will cease to exist at the moment of transition.

Anyway, we are still continuing to work on this blasted Y zero K problem. I will send a parchment to you if anything further develops.

If you have any ideas please let me know,

In small village under the control of the Roman Empire there lived a poor farmer. Thanks to the fertile soil of his land he always had success growing berries, especially strawberries. That year, because of drought-like conditions his berry yield was going to be very poor. One day as he walked about the barren berry patch he spotted one single, rather large strawberry.

It wasn't long before news of the giant berry spread throughout the countryside. Villagers came from miles around to admire and to praise the farmer's berry. It was inevitable that the news would also eventually reach Rome.

Julius Caesar decided that the berry belonged to the Roman Empire. So he called upon his trusted friend and well-known speech maker, Marc Anthony. (This was before he married Halle Berre.) He instructed him to lead a legion of troops to the farm to claim the berry for "the greater good" of the Empire.

To insure that there would be no uprising, Antony had prepared a speech to to be given to the farmer and the village inhabitants. He stood before the gathered villagers with the intimidating line of soldiers behind me.

He thus opened his speech, "Friends, Romans and countrymen, I come not to praise your berry, but to seize it."

Today Undefeated Lions vs the Gladiators
1st Roman: "What time is it?
2nd Roman: "XX past VII."

If Ancient Rome Had The Internet...

* The destruction of Pompeii in 79AD is the most viewed video at YouTube. The first comment is..."OMG so cool! Volcanos ROCK!"

* Attila the Hun has his own MySpace page. Nobody ever rejects his "invite a friend" emails.

* The soothsayer's "Ides of March" email fails to get Caesar's proper attention as it's inadvertently filtered into his junk folder.

* The owner of hadriansucks.rome is compelled to hand over both the domain name and selected body parts by an independent domain tribunal chaired by...Emperor Hadrian.

* "Naked Cleopatra" is the top search term on Google.

* Unfortunately, the Queen of Egypt dies an early death after misunderstanding IT's call to embrace an ASP solution.

* Hannibal blogs his way across the Alps with posts like, "Whoops, lost another elephant today."

* But he runs out of money when his PPC budget is plundered by an iberian click scam organized by Publius Cornelius Scipio.

* Websites like handsome-literate-male-british-slave.com pollute the search listings thanks to generous commissions at the slaves.co.rome affiliate program.

* The Colosseum is renamed the eBay Colosseum, with free wireless hotspots outside the lark's tongue restaurant.

* The volume of spam collapses when the penalty for not providing a working opt-out mechanism becomes equal billing with the lions at the eBay Colosseum.

* But we still get emails featuring Brunhilda, the lonely Visigoth, and hot deals on cheap peacock livers from Gaul.

* Nobody invents a spam filter good enough for the House of the Vestals.

* Classical geeks wear t-shirts proclaiming, "there's no place like CXXVII.0.0.I" (bonus points if you get that one)

* Finally, Rome burns to the ground while Emperor Nero battles online with Hakkar the Soulflayer in World of Warcraft.

COMMERCIAL BREAK
We interrupt this blog for a word from the following sponsors:

And the makers of AQUADUCT TAPE.
Keeping aquaducts leak-free since 150 BC.

No.1329
Curmudgeon responsible for this post: Hale McKay at 9:26 PM

RSPN Dateline Carrhae,Parthia, 53BC (Before Clinton): in the West vs East All-Stars match-up that has long been anticipated by bookies in Las Naples, Marcus Crassus took an early lead in a battle royale between his legionary Mesapotameaan Madmen, and the Parthian Shots of the Surena. But a tactical gaffe and a blown inning by the younger Publicus Crassus, led to a turning of momentum, and the lopsided defeat of the Madmen by the superior equinine archery skills of Surena's Parthian Shots, costing Crassus the match, the trophy, his head, and 3/4s of the team, and all the lands east of modern-day Mesopotamia. Coming up: Caesar vs Pompey in a best-of-seven from the amphitheatre at Pharsalus. And now, a message from Trojan brand Athletic Supporters...

We sometimes forget just how competitive the athletes of ancient times were.

I remember reading that Benhim (Benhur's sister) was traded to another team, the Cambrian Fire for a chariot to be named later.

Yeah, I wonder what the Spartans would have thought of the current-day sport of curling?