Hillary At the Bat 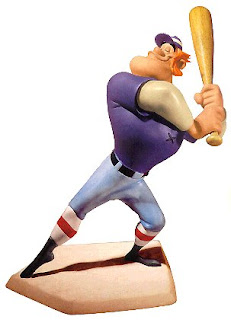 The following parody has been written with heartfelt apologies to Ernest Lawrence Thayer, and with respect and admiration for his 1888 classic, "Casey At The Bat."

The mythical Mudville is but a metaphor for a typical American town where hope springs eternal that this would be the year promised last year. The aromas of popcorn, peanuts, hot dogs, beer and Cracker Jacks wafts through the cheering crowds in the stands.

As surely as it's Spring, it's also time for some baseball. So won't you stand and root-root-root for your favorite team. PLAY BALL!

Hillary At The Bat

The outlook wasn't brilliant for the Clinton camp that day:
The opponent was ahead, with not many campaigns left to play.

And when Teddy chose Obama, and Caroline did the same,
A snubbed silence fell upon the politicos of the game.

A faithless few changed sides in deep despair. The rest
Clung to toilets from the hot dogs they had for breakfast;

They thought, if only Hillary could get but a hack at that -
We'd put up even money, and votes, with Hillary at the bat.

But Chelsea preceded Hillary, as did Bubba for Christ sake,
And the former was a geek and the latter was on the make;

So "Na-Na-Na, Hey Hey Goodbye" the multitude began to sing
For there seemed little chance of Hillary getting to swing.

But Chelsea let drive a single, to the wonderment of all,
And Bubba, the much maligned, tore the cover off the ball;

And when the dust had lifted, and the men saw what had occurred,
There was Bubba safe at second and Chelsea was a-hugging third.

Then from 5,000 throats and more there rose a bawdy yell;
It rumbled up in heaven, and it rattled way down in hell;

Then there was silence as she wobbled on ankles too fat,
For Hillary, unsightly Hillary, was advancing to the bat.

Responding to the jeers, she quickly flipped a bird and spat,
No stranger in the crowd could doubt 'twas Hillary at the bat.

Ten thousand eyes were on her as he rubbed her hands with dirt;
Five thousand tongues applauded when ahe wiped them on her skirt.

Every eye was upon her, nowhere was there one who didn't watch
As she exposed some cleavage and then scratched at her crotch.

Then while Dubya the pitcher ground the baseball into his hip,
Defiance gleamed in Hillary's eye, a sneer curled Hillary's lip.

And now the leather-covered sphere came hurtling through the air,
And Hillary stood a-watching it as she run her fingers in her hair.

Close by the crusty batsman over the plate the ball unheeded sped-
"That ain't my style," said Hillary. "Strike one," the umpire said.

From the benches, black with people, there went up a terrible roar,
Like her yelling at Bubba - when he was out carousing with a whore.

"Kill him! Kill the umpire!" shouted someone out in the stadium;
And its likely they'd a-killed him had not Hillary flashed her bum.

With the smirk of a charlatan and with Hillary's unmitigated gall,
She stifled the rising tumult; and told Dubya "Throw the damn ball."

She signaled to the pitcher, and once more the spheroid flew;
But Hillary still ignored it, and the umpire said, "Strike two."

"Asshole!" cried the maddened thousands, and echo answered asshole;
But one scornful sneer from Hillary, the audience was in her control.

They saw her face grow stern and cold, they saw her wrinkles strain,
And they knew that old Hillary wouldn't let that ball go by again.

The sneer is gone from Hillary's lip, her teeth are clenched in hate;
She pounds with cruel violence her bat as if upon Bubba's white pate.

And now the pitcher holds the ball, and now he lets it go,
And now the air is shattered by the force of Hillary's blow.

Oh, somewhere in this favored land the sun is shining bright;
The band is playing somewhere, and somewhere hearts are light,

And somewhere men are laughing, and somewhere the children shout;
But there is no joy in Clintonville - mighty Hillary has struck out.

"Kill her! Kill the batter!" someone shouted out in the stadium;
And its likely they'd a-killed her had not Bubba flashed his bum.

No.1310
Curmudgeon responsible for this post: Hale McKay at 8:51 PM

Thanks. It was fun to write.