Hillary: At the Movies

Her Seriocomical Last Gasps of Air 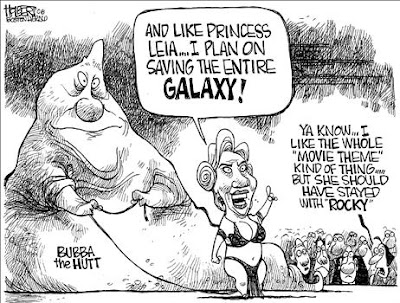 Hillary Clinton has raided Ted Turner's movie vaults. From the treasure troves of filmdom at TBS and TMC, the President Queen wannabee is foraging through scores upon scores of titles and reels looking for that one theme, THE theme that will endear herself to the voters and delegates.

With husband Bill in charge of the final editing process, she is ready to impress America and convince them that she deserves the White House throne.

Yesterday she set out on an exhaustive screening process attended by her faithful followers and those still loyal to her campaign aspirations. The massive 2000-seat theater began to fill up, in three hours a dozen Hillary-ites had piled in, fighting for the desired back row of seats. Hubby Bubba was busy garnering votes from the theater staff. He was seen on several occasions chasing the usherettes up and down the aisles.

The audience grew still as the credits appeared on the screen heralding the ridiculously brilliant brilliantly ridiculous produced montage of digitally altered film scenes. There was a noticeable hush among the attendees and the theater grew quiet, save for a shriek somewhere out front. Bubba had managed to catch one of the usherettes.

Hillary of Arabia - Hillary leads a pack of camel jockeys in a fight for independence. Gets lost in a sandstorm. All hope is lost but she refuses to give up.

Curse of the Dummy - (Sequel to "Hillary of Arabia") Hillary lost in sand storm meets 3000-year-old dummy, marries him and is still unable to find her way.

Miracle on 1600 Pennsylvania Ave - Hillary doesn't believe in Bubba Claus unless he can deliver her the White House. In a dramatic climax, when she finds the idiot got her a white house in Slippery Rock instead, she beats him with a cane he left there.

They Shoot Whores, Don't They? -It's the Inaugural Ball (for someone else)as the new President. Husband Bill is dancing with every skirt there. When he starts kissing and fondling them, she begins to lose control. When he breaks out the cigars, she goes postal.

They Died With Their Pants On - (Sequel to "They Shoot Whores Don't They?") When the smoke clears all the women Bill was romancing lie scattered about the ballroom floor. Only Bubba is left standing. It seems Hillary was not a very good marks-woman.

Cinderella Hillary -Still campaigning even after the delegation names Obama as their Presidential candidate, Hillary's coach turns into Bubba and he's chasing the horses who turned into scantily clad Hooters girls.

Swindler's List - Hillary is forced to reveal her tax returns.

She Wore A Yellow Apron - If losing her Presidential bid wasn't enough, she learns that New Yorkers don't like or want her either, Hillary purchases a hot dog vending cart in NYC.

2008 A Race Odyssey -Years later Hillary writes her memoirs and details her battle against a black man. Mad Magazine is the only bidder for her manuscripts and movie rights.

Monica of Sunnybrook Farm -The land she purchased for the future site of her Presidential Library is converted to a dairy farm. Unbeknown to her Bubba hires Monica Lewinsky to be the "head" milkmaid.

Lord of the Flings - Bubba plans to write his memoirs with sordid details of all of his conquests. Oddly there is no mention of Hillary. He receives a $250 million cash advance before he has written a word.

Citizen McCain -John McCain, the President of the United States names both of the Clintons ambassadors. Bubba is appointed ambassador to the nation's nudist colonies, while Hillary is sent to Zimbabwe.

From Here To Infirmary - Hillary, irate after losing the Democratic nomination, overdoses on anti-psychotics and spends three weeks in bed. Bill in the meantime is in another ward in full-body traction after offering Rosie O'Donnell a cigar.

It is at this point Hillary realizes that Bubba has f**ked up royally in the editing of her film extravaganza. She is irate. She was going to lose the election anyway - she didn't need him adding an exclamation point!

So it has come pass - she still has not given up. She must be using Energizer batteries to keep her going - in public and in private.

No.1309
Curmudgeon responsible for this post: Hale McKay at 9:08 PM

LOL I just wonder, if Hill-dog gets elected, who will be found under HEr desk...

that was classic! loved it! i can't wait until this stupid primary in PA is over so i don't have to listen to her. man, i am hoping we can just knock her the heck out of the race.

Yawp...once one gets that 'sense of entitlement' mentality, they just become a spoiled brat being told "no" for the first time, when things don't go as they insist it shoulda.

The night she doesn't get the nod, there'll not be an intact lamp in her suite...

I (shudder) to think about that. ONe thing is certain, it wouldn't be dear old Bubba.

For all intents and purposes, she is already been knocked out of the race. She apparently hasn't realized it or simply won't accept it.

When she is officially told she isn't getting the nod - and when she finally accepts that fact - I can't imagine the damage to any accoutrements of said suite.

It may rival the damage and carnage that used to follow a Led Zeppelin concert.

Viagra is the medicine that is recommended by doctors worldwide for erectile dysfunction. It is the chemical composition of both forms of this drug and helps to cause erection on stimulation of the penis by inhibiting the enzyme phosphodiesterase type 5 which causes smooth muscle relaxation and a better erection.

Propecia is a one-a-day, FDA-approved, treatment for male pattern hair loss at the crown or in the middle of the scalp (androgenetic alopecia).