A Wright Makes a Wrong 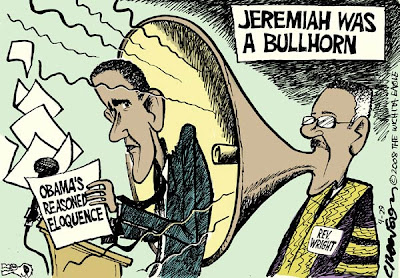 Jeremiah was a bullhorn
He's not a friend of mine
I never believed a single word he said
But I listened to him preach and whine
And he always had some mighty lame whines
Wright was singin'...

God Damn America
All the Jews and whites now
God damned government invented HIV
Just for you and me
Wright: Stop the music! Stop that song!
Barack: Rev'rend Wright. What are you doing here?
Wright: You can't record a song without a backup vocalist!
Barack: You already have me backing up in the polls. Ain't that enough?
Wright: What? You still mad about what I said, even though it's all true?
Barack: Rev'rend, I'm tryin' to be Prez'dent. You're ruining it for me!
Wright: You insinuatin' I've been talkin' out my ass?
Barack: Well, seein' how you been usin' Chap-Stick and Ex-Lax interchangeably...
Wright: Hey! That ain't no way to be talkin' to a man of God, especially one that married you and baptized your kids. 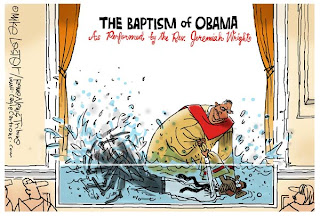 Barack:Thanks for nothin'! They're still afraid of water to this day! Come to think of it, so am I!
Wright: Come on, what's to be a-scared of? There was no soap in that water!
Barack: Yeah? What about that fish that was swimmin' in there?
Wright: Don't you know nothin'? That was a holy mackerel.
Barack: Looked like a carp to me.
Wright: What can I say? You're a fish out of water anyway.
Barack: You callin' me a sucka?
Wright: Now look here, Obama, I'm tryin' to get you elected the first black Prez'dent.
Barack: With the kind of help you're givin', I might as well cede to Hillary now.
Wright: What? No way! If you quit how am I gonna get appointed to a high post on your staff?
Barack: So, that's what this is all about? Pray tell, to what position do you think I'd appoint you? 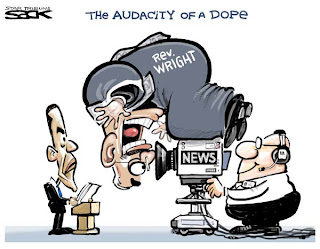 Wright: Vice Prez'dent, of course!
Barack: Swell. I'd be right where I am now, worryin' about what you might say next.
Wright: Hell, I wouldn't be no worse than that fool Cheney.
Barack: Maybe, but at least Cheney only shoots off his shotgun.
Wright: You callin' me a fool and a loudmouth?
Barack: Let me put it this way, you ain't exactly the quietest hog in the sty.
Wright: Now you've stooped to callin' your preacher names? Well, sticks and stones might break my bones, but words ain't gonna ever hurt me.
Barack: (- - No response. Picks up a large sack. - -)
Wright: Say, what's in the bag?
Barack: STICKS and STONES!
Wright: Heh-heh. I gotta run. Remember, if you need help with your campaign just let me know. ( - - Door hits him in the ass on the way out. - - )
Barack: Now, where was I on that song? Oh, yeah.

If I were the next President
Tell you what I might do
I'll throw all the sticks and the stones and then let
The Rev run the DPU
Sing it now ...

Barack: Now that's a hit if I ever heard one.