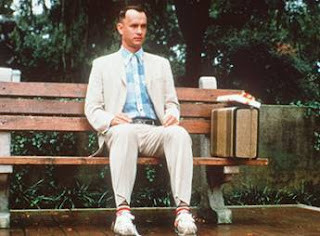 He is at the Pearly Gates, met by St. Peter himself.

However, the gates are closed, and Forrest approaches the gatekeeper.

St. Peter said, "Well, Forrest, it is certainly good to see you. We have heard a lot about you I must tell you, though, that the place is filling up fast, and we have been administering an entrance examination for everyone. The test is short, but you have to pass it before you can get into Heaven."

Forrest responds, "It sure is good to be here, St. Peter, sir. But nobody ever told me about any entrance exam. I sure hope that the test ain't too hard.
Life was a big enough test as it was."

St. Peter continued, "Yes, I know Forrest, but the test is only three questions.

First: What two days of the week begin with the letter T?
Second: How many seconds are there in a year?
Third: What is God's first name?"

Forrest leaves to think the questions over.

He returns the next day and sees St. Peter, who waves him up, and says, "Now that you have had a chance to think the questions over, give me your answers"

Forrest replied, "Well, the first one -- which two days in the week begins with the letter "T"? Shucks, that one is easy. That would be Today and Tomorrow."

The Saint's eyes opened wide and he exclaimed, "Forrest, that is not what I was thinking, but you do have a point, and I guess I did not specify, so I will give you credit for that answer. How about the next one?" asked St. Peter.

"How many seconds in a year? Now that one is harder," replied Forrest, but I thunk and thunk about that, and I guess the only answer can be twelve."

Astounded, St. Peter said, "Twelve Forrest, how in Heaven's name could you come up with twelve seconds in a year?"

"Hold it," interrupts St. Peter. "I see where you are going with this, and I see your point, though that was not quite what I had in mind.... but I will have to give you credit for that one, too. Let us go on with the third and final question. Can you tell me God's first name"?

"Andy?" exclaimed an exasperated and frustrated St Peter. "Ok, I can understand how you came up with your answers to my first two questions, but just how in the world did you come up with the name Andy as the first name of God?"

"Shucks, that was the easiest one of all," Forrest replied. "I learnt it from the song,

*(This was received in an e-mail from my brother-in-law, Donald. Thanks, Don!)

PECANS IN THE CEMETERY**

On the outskirts of a small town, there was a big, old pecan tree just inside the cemetery fence. One day, two boys filled up a bucketful of nuts and sat down by the tree, out of sight, and began dividing the nuts.

He just knew what it was. He jumped back on his bike and rode off. Just around the bend he met an old man with a cane, hobbling along.

"Come here quick," said the boy, "you won't believe what I heard! Satan and the Lord are down at the cemetery dividing up the souls."

The man said, "Beat it kid, can't you see it's hard for me to walk." When the boy insisted though, the man hobbled slowly to the cemetery.

The old man whispered, "Boy, you've been tellin' me the truth. Let's see if we can see the Lord."

Shaking with fear, they peered through the fence, yet were still unable to see anything. The old man and the boy gripped the wrought iron bars of the fence tighter and tighter as they tried to get a glimpse of the Lord.

At last they heard, "One for you, one for me. That's all... Now let's go get those nuts by the fence and we'll be done."

They say the old man made it back to town a full 5 minutes ahead of the
kid on the bike.

**(This came from that truck driver, Earl. Thanks, Earl.)

Read 'em both a while back, but they are still ROTFLMAO funny.

The old guy ran faster than the kid on the bike, 'cuz the old guy was cognizant enough to realize the "nuts by the fence" might not be the two of them...

Those are two of the finest, Poindexter. Thanks much.

I LOVE that Forrest Gump story!:-)

I guess they are currently making the e-mail run again. Yes, both of them were very funny.

Glad you liked them. Good enough to "lift?"

I got a good kick out of the Forrest Gump story too.

Then again I got a good kick, fortunately in another place resulting in a belly laugh, over the other one too.

I think you're right.