Sounds in the Night

She was what we used to call a suicide blonde - dyed by her own hand. -Saul Bellow

How's that for a segue into a blonde joke?

A car gets a flat on the interstate one day. The blond driver eases it over onto the shoulder of the road, carefully steps out of the car and opens the trunk. She takes out two cardboard men, unfolds them and stands them at the rear of the vehicle facing oncoming traffic.

The lifelike cardboard men are in trench coats exposing their nude bodies and private parts to approaching drivers. Not surprisingly, the traffic becomes snarled and backed up.

It isn't very long before a police car arrives. The officer, clearly enraged, approaches the blond of the disabled vehicle yelling, "What's going on here?"

"My car broke down, officer," says the woman calmly.

"Well, what the are these obscene cardboard pictures doing here by
the road?" he asks.

"Helllooooooo!!!!" says the blond. "Those are my emergency flashers!"

A guy walked into the local welfare office to pick up his check. He marched straight up to the counter and said, "Hi. You know, I just HATE drawing welfare, I'd really rather, have a job."

The social worker behind the counter said, "Your timing is excellent. We just got a job opening from a very wealthy old man who wants a chauffeur and bodyguard for his beautiful daughter. You'll have to drive around in his Mercedes and he'll supply all of your clothes. Because of the long hours, meals will be provided.You'll be expected to escort the daughter on her overseas holiday trips and you will have to satisfy her sexual urges. You'll be provided a two-bedroom apartment above the garage. The salary is $200,000 a year."

The guy, wide-eyed, said, "You're bullshittin' me!" 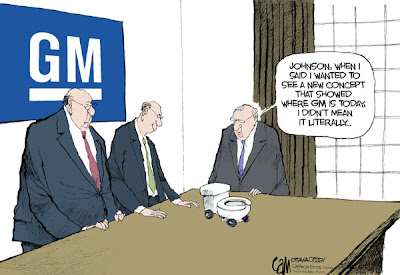 A couple had not been married for long, when the husband came home one day to find that his bride had disappeared. He got very worried and gathered up all his friends to search for his wife with no success.

Two days after his wife disappeared the man returned home to find her in the kitchen. He asked her what she had been up to and why she hadn't been home for so long.

She replied: "These four men kidnapped me and had wild sex with me for a week."

The husband answered: "But it's only been two days what do you mean a week?"

"I’m just here to make them some sandwiches."

No.1391
Curmudgeon responsible for this post: Hale McKay at 7:21 PM

I just about fell off my chair after looking at the GM cartoon. What a hoot.

I laughed long and hard when I found that "GM" cartoon. I just had to find a way to incorporate it into a post.

You are right about the "Watergate" headline showing the date of this cartoon strip.

It becomes the them for the Sunday POODLE DOODLES cartoon in the next post.