To some, the second cartoon may appeared to have been drawn in primitive times. The younger readers will wonder about the small TV set with a single wire running from the back and the extended rabbit ears antenna.

Those of us who have been around a little longer will recognize that the panels represent a time before cable television. It was drawn in 1973. During those "primitive" times my wife and I were entertained by a 13" TV, a state-of-the-art color set - for which we had to cross the room to change channels.

Overheard - a conversation between a parent, his teenage son and his 6-year-old son:

A parent: (to teen) "When I was your age, we had to go to the library for research."

Yes, there was Monday Night Football way back then and "Lassie" was still being aired on network stations. (For the record, MNF featured Frank Gifford, "Dandy" Don Meredith, and the verbose Howard Cosell behind the microphones.)

Yeah, 1973 was a simpler time. Not much happened that year either: 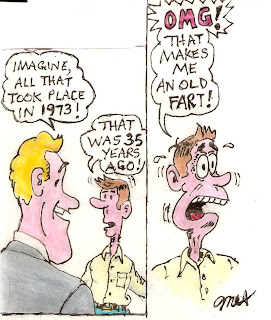 Good Grief ! I remember all of that!

I saw a few good movies that year:
Many of our television sets in 1973 were tuned in to:
It is a miracle, isn't it that we survived 1973 ? With no TV remotes, no Internet, and no cell phones, or cordless phones for that matter, we were able to eke out an existence and survive.

In 1973 I had Poodle Doodles to occupy my time when I wasn't watching TV on our five or six available channels. After thirty-five years of sitting in the bottom of a drawer and nearly forgotten, the strip managed to save a few "snapshots" of the early 70s.

*Fred, noted in his comment to the Saturday Poodle Doodles posting the Watergate headline on the newspaper.

No.1392
Curmudgeon responsible for this post: Hale McKay at 7:35 PM

I really do enjoy the cartoons! I think you should draw them again.

i do remember when we had to turn the dial on the TV set to change channels. i used to be embarrassed to be so old, but now i'm okay with it.

By 1973, I had lived over half my life. Did anything good happen since then?

Thanks again. I will definitely start drawing again. Since I now have a working scanner, I intend on showcasing some of it here.

me too. I have also accepted the fact than I am older than i once cared to be. It's life.

...And I had probably lived about a third of mine - less hopefully.