A Tiger in the Bowl

During my woodworking and crafting phase, I often reproduced images of cartoon characters onto wood, slate and other surfaces. I sold a few of these pieces to some local business owners. For example, a sign with an image of Betty Boop holding a bouquet of roses went to a florist. A framed black & white drawing of Edward Scissorhands once hung above the cash register in a barber shop.

The image below was painted with acrylics onto a 12x6 piece of slate. It sold at a craft show for $35. I don't remember exactly what colors were used on the piece, so I enlarged the original sketch and added color using colored pencils before scanning it today.

Six months after the piece was sold I learned from a friend that he had seen it on the door of a coffee shop. Someone had added some lettering to it. I thought the words were clever.

Feeling GOOFY Before Your Morning Coffee? 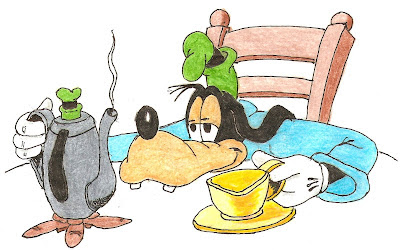 We Have A Fresh Pot Made Especially For You!
About three months after that I saw the image reproduced in a local newspaper as an advertisement for the coffee shop. I visited the coffee shop and identified myself as the artist and gave the owner a business card. I told him if he ever wanted any similar work in the future he could give me a call. He informed me that he had bought the piece from a young woman who claimed it was her work. He had paid her $50!

From that point in time on, I began to sign my name on the backs of the pieces and gave out my business card with every sale. I also either signed or added my initials to my original drawings. (There was an exception of course. I would have never signed my name on a reproduction of Goofy or any other character copyright protected.) 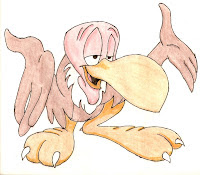 Buzzard Blog
I guess I should tie in the title of this post now with a visual assist from Beaky Buzzard. Why use a buzzard? Well, apparently I am one, an old one. At least this what a young girl at Dunkin' Donuts must have thought, because that's what called me this morning.

Some time ago, I swore off Dunkin' Donuts. Not long after that, I made the same vow again after my first ever and only visit to a Starbucks. As such as our economy has become, I have accepted the fact that franchise donut and coffee establishments routinely practice:

because they'll pay it anyway. (A $1.59 small cup of coffee will only half-fill the mug I use at home.)

Although it strengthens my resolve not to be ripped off, the prices weren't the deciding factor preventing my shadow from being cast upon the entrances to these places. It was due to the ineptitude of the hired helpless.

While out for the Sunday paper I had a sudden craving for one of those over-sized honey rolls. Since I only had a $20 bill, I figured I'd get a half dozen donuts for the house and I reluctantly opted to get also get a small cup of coffee. I ordered the extra stuff because I am loathe to see the hired helpless struggle to make change. As it is, they have enough on their plates dealing with the English language.

I first requested the coffee roll, their present name for what used to be called a honey roll. She reached instead for a coffee cake muffin. I told her, "No, no. Coffee roll, not a muffin." She looked like she was glaring as she put the muffin back. Then she said in her best Yoda impression, "What it is you want?" I glanced at the door over my left shoulder. I still had a chance to get out of there in one piece.

The coffee roll safely secured in a bag, I asked for the six donuts, "I'll have 2 each of the jelly, apple-filled and powdered cinnamon."

She returned to the counter with six white powdered donuts! "No, no," I said. "I didn't ask for six of the same thing." We both exhibited exasperation, although I was the only one who should have been. She, not so cheerfully, returned the donuts back to the basket bins. I held up two fingers and ordered the specific donuts I wanted in three steps. "Two jelly donuts. Two apple-filled. And two cinnamon powdered."

Alas, two out of three ain't bad. Damned if she didn't grab not the two cinnamon, but two white powdered! She raised her voice and said, "You say two powdered." I shook my head and countered, "I said cinnamon ... powdered."

Finally, we were making progress. Pardon the pun, but we were on a roll! I glanced at my watch and noted that I had only been there 15 minutes. There was only the matter of a small cup of coffee left to be subjected to debate.

I spoke slowly, deliberately, almost one syllable at a time, "I'd ... like a ... small cof...fee." I paused to make sure that the size of the cup would not become a bone of contention. "With ... milk ... on the light side." I paused again and watched as she promptly began tapping on the plunger of the container labeled cream.

While she was dumping the cup and starting over, I looked around. When I had entered the place I was the only customer. There stood four ladies in line behind me. They were all glaring, not at the hired helpless, but I believe, at me!

She was standing there holding the cup and asked, "Milk in your coffee?" I nodded. She started to put the lid on the cup. "Sugar. I want sugar too. Just a level teaspoon." She spooned out a heaping spoonful. I quickly said, "Better make that a half teaspoon." She was looking at me and I reluctantly used a word that I wasn't sure she'd ever heard, "Please."

I noticed as she was putting the lid on the finished masterpiece, the color of the liquid inside was dark. I decided it would be pointless to ask her to pour out some the coffee and add some more milk.

I turned to the women behind me and held up the twenty and announced, "...And now for the grand finale. She gets to make change!"

I guess the girl didn't appreciate my public announcement very much. "You mean. You give hard time to me. You mean old buzzard!"

Funny, but I thought I was being very patient. Mean? A mean ... old buzzard? I thought to myself, "Hell honey, if I was your boss you'd probably be fired."

"Seven dollar eighteen," she said taking the twenty. She looked first at the twenty, then at the register, at me and then back at the twenty again. "You have change?" she then asked. I shook my head, "No change, just the twenty."

Suddenly she said, "I make mistake. No eighteen. Only seven dollar." She handed me $13 as change. I could clearly see the numbers on the register: $7.18. 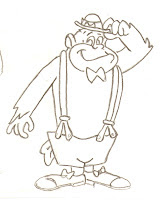 I turned to leave, still a little miffed that she called me a buzzard, and a mean old one at that. I thought to myself that she was lucky I wasn't a temperamental old ape! Alas, if were an ape I'd probably still be as patient and gentle as Magilla Gorilla.

Not wanting her to feel victorious with her quick thinking and sacrifice of 18 cents, I reached into my pocket and pulled out a dollar bill. I handed her the bill and said, "Here's a tip for you. Use this to put toward some English lessons."

I nodded to the ladies in line and said to them, "Good luck and have fun. I hope none of you have appointments within the next hour."

When the door closed behind me, I could have sworn that I heard a female voice say something that sounded like: You master, gun on a beach!

No.1413
Curmudgeon responsible for this post: Hale McKay at 6:13 PM

OK, where did my comment go from this morning?

I don't think it was especially witty but I did compliment you on the fine cartoons and mentioned that I've never even tried coffee. The smell is horrible.

Thanks for the compliment on my cartoons. Hopefully posting those old ones will get me motivated to continue - or resurrect the strip with a new cast of charcters (current pets).

Wow! You've never had coffee - ever? I can't imagine not having my cups of Joe.

Yup, never. The smell has always made me borderline sick.