The "Hard" of the Matter 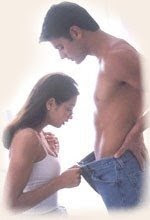 The Prescription
A man went into a pharmacy and asked to talk to a male pharmacist.

The woman he was talking to said that she was the pharmacist and that she and her sister owned the store, so there were no males employed there. She then asked if there was something she could help the gentleman with.

The man said "This is embarrassing for me, but I have a permanent erection which causes me a lot of problems and severe embarrassment. I was wondering what you could give me for it?"

The pharmacist said "Just a minute, I'll go talk to my sister."

When she returned, she said, "the best we can do is 1/3 ownership in the store and $3000 a month in living expenses."

The Priest asks, "Was it Mary McCarthy?"

"Was it Rita Sanchez?" asked the priest.

"No, father, it wouldn't be right for me to mention any names."

With this, the priest tells him to sin no more and gives him penance.

The man walks home (deeply depressed); his wife is already expecting him at the front door and asks him what the doctor said concerning his problem. He tells her what the doc told him. She says, "Oh no, only 30 times! We shouldn't waste that. We should make a list!"

"Mr. Thomas, bring her back with you tomorrow and let me see what I can do."

The next day, the worried fellow returned with his wife. "Take off your clothes, Mrs. Thomas," the medic said. "Now turn all the way around. Lie down please. Uh-huh, I see. Okay, you may put your clothes back on." 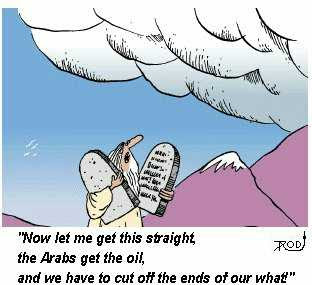 Pain in the Ass
John is in Amsterdam and visits a nudist colony there.

While wandering around naked he spots a gorgeous blonde and he immediately gets an erection. The woman notices his erection, comes over and says "Sir, did you call for me?"

She says "Well, it's a rule here that if I give you an erection, it means you called for me."

She then lays him down and starts making love to him.

Later that day John visits the sauna, but as he sits down he farts. A huge big hairy guy gets up, drops his towel to show a huge erection and says "Sir, did you call for me?"

The man says, "It's a rule that when you fart, it implies you called for me." The man then knocks John to the floor and has his way with him.

As soon as he's finished John rushes back to his room, grabs all his things and heads for the exit. On his way out he's stopped by the manager who asks "Can I help you ?" 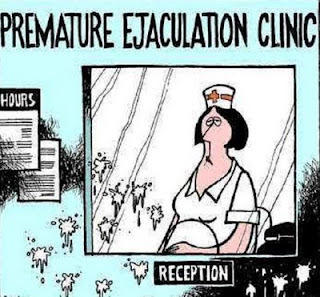 The Plan
A knockout young lady decided that she wanted to get rich quick. So she proceeded to find herself a rich 73-year-old man, planning to screw him to death on their wedding night.

The courtship and wedding went off without any problem, in spite of the half-century age difference. On the first night of her honeymoon, she got undressed, and waited for him to come out of the bathroom to come to bed.

When he emerged, however, he had nothing on except a rubber to cover his 12-inch erection, and he was carrying a pair of earplugs and a pair of nose plugs. Fearing her plan had gone amiss, she asked, "What are those for?"

The old man replied, "There are just two things I can't stand - The sound of a woman screaming, and the smell of burning rubber!"

No.1404
Curmudgeon responsible for this post: Hale McKay at 7:10 PM

It's assuring to know that what is funny in the U.S. is also funny down under.

Ok, I tried your paragraph music puzzle...I got 43 of them. Not bad considering the 70s were my era. I liked it!

I did something similar on product names found in a grocery store. Look for a post called "Selling Out" on Nov 2, 2007. I'd link it but I don't know how to link in a comment. There were 65 products put into a single paragraph and the answers are in the comments.

LMAO at the last joke.

ve, to link in a comment I use the following:

Give it a try and let us know how it works. Hope this is helpful

"Selling Out" -
That sounds interesting - I'll check it out.

I always try to leave what I think is the best joke for the last - and I thought that was one of the best I've read/heard in a while.

A joke right up your alley, eh? (Pardon the pun.)