Chairman of the Bored

Probably because of the heat and humidity, I was lethargic for most of the day. It got old trying to watch a movie, dozing off and waking up in the middle of another program. This particular Saturday was the kind my wife hates - I had it off and she had to work!

So, I decided to log in to read some of your Blogs from my Blogroll. All the while I found myself still in a nodding off mode. After hitting a dozen or so I figured I might as well post something. That didn't prevent me from nodding off either.

I surrendered to ennui and to the realization there would not be much original fresh ideas emanating from within the inner walls of my skull on this day. If I was going to able to post anything, it was going to be in lieu of one of those forays into my archives.

I didn't want to rerun an entire post, instead I surfed random sites and grabbed a few jokes to force feed any readers who might land here today.

Lorraine
There was a guy and he had a girlfriend called Lorraine. She very pretty and he liked her a lot. One day he went to work to find that a new girl had started working there.

Her name was Clearly and she was absolutely gorgeous. He began to like her and after a while it became obvious that she was interested in him too. But, he was a loyal man and he wouldn't get involved with Clearly while he was still going out with Lorraine.

He decided that there was nothing for him to do but to break up with Lorraine and date the new girl. He planned several times to tell Lorraine, but he couldn't bring himself to do it.

One day as they were walking along the river bank, Lorraine slipped and fell in to the river. The current carried her off and she drowned. The guy stopped for a moment by the river and then ran off smiling and singing, "I can see Clearly now, Lorraine is gone...

Did you know there are 99 words for breasts? 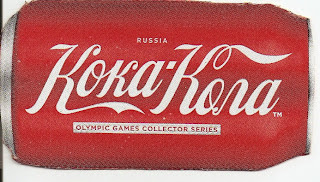 A couple of weeks ago I stopped at a convenience store to get a cold drink. From the refrigerated chest I grabbed a can of my usual Coke Classic. As I was making my way to the front of the store I looked down at the can in my hand and saw the logo pictured above, left. 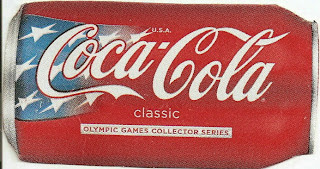 I turned to put it back thinking I had grabbed the wrong thing. The can turned in my hand, and it was then I realized it was a promotional "collectible" can for the upcoming Summer Olympics in Bejiing, China. I missed the news that Coke was going to be using these special cans. Now I know.

Open Wide
A little boy goes shopping with his mother and is waiting right outside of the ladies dressing room for his Mom to come out. While waiting, the little boy gets bored, and just when his Mom comes walking out, she sees her son sliding his hand up a mannequin's skirt.

"Get your hand out of there!" she shouts. "Don't you know that women have teeth down there?"

The little boy quickly snatches his hand away and thanks his lucky stars he didn't get bitten.

For the next ten years, this little boy grows up believing all women have teeth between their legs. When he's 16, he gets a girlfriend. One night, while her parents are out of town, she invites him over for a little action. After an hour of making out and grinding on the sofa, she says, "You know, you could go a little further if you want.

"What do you mean?" he asks. "Well, why don't you put your hand down there?" she says, pointing to her crotch.

"Don't be ridiculous," she responds, "there's no such thing as teeth down there!"

"No, there aren't," she insists. "Here, look for yourself." With that, she pulls down her pants and gives him a little peek.

"No, I'm sorry" he says. "My Mom already told me that all women have teeth down there."

"Oh for crying out loud!" she cries. She whips off her panties, throws her legs behind her head and says, "LOOK, I DON"T have any teeth down there."

The boy takes a good long look and replies," Well, after seeing the condition of those gums, I'm not surprised!"

The wife said, "You should do it because you get up first, and then we don't have to wait as long to get our coffee.

The husband said, "You are in charge of cooking around here and you should do it, because that is your job, and I can just wait for my coffee."

Wife replies, "No, you should do it, and besides, it is in the Bible that the man should do the coffee."

Husband replies, "I can't believe that, show me."

This next one, originally posted in 2006 has proven to be a prognosticator of the year 2008. As ridiculous as some of the following seem, many of these fees are in effect today.

The Future of Airlines in America
Attendant: Welcome aboard Continental, sir. May I see your ticket?

Attendant: For telling you where to sit.

Passenger: But I already knew where to sit.

Attendant: Nevertheless, we are now charging a seat-locator fee of $5. It's the airline's new policy.

Passenger: That's the craziest thing I ever heard. I won't pay it.

Attendant: Sir, do you want a seat on this flight, or not?

Passenger: Yes, yes. All right, I'll pay. But the airline is going to hear about this.

Attendant: Thank you. My goodness, your carry-on bag looks heavy. Would you like me to stow it in the overhead compartment for you?

Passenger: That would be swell, thanks.

Passenger: This is extortion. I won't stand for it.

Attendant: Actually, you're right -- you can't stand. You need to sit, and fasten your seat belt. We're about to push back from the gate. But first I need that $10.

Attendant: Sir, if you don't comply, I will be forced to call the air marshal. And you really don't want me to do that.

Passenger: Why not? Is he going to shoot me?

Attendant: No, but there's a $50 air-marshal hailing fee.

Attendant: Thank you for your cooperation, sir. Is there anything else I can do for you?

Passenger: Yes. It's stuffy in here, and my overhead fan doesn't seem to work. Can you fix it?

Attendant: Your overhead fan is not broken, sir. Just insert two quarters into the overhead coin slot for the first five minutes.

Passenger: The airline is charging me for cabin air?

Attendant: Of course not, sir. Stagnant cabin air is provided free of charge. It's the circulatin air that costs 50 cents.

Passenger: I don't have any quarters. Can you make change for a dollar?

Passenger: But you've given me only three quarters for my dollar.

Passenger: For cryin' out loud. All I have left is a lousy quarter? What the heck can I do with this?

Attendant: Hang onto it. You'll need it later for the lavatory.

Curmudgeon responsible for this post: Hale McKay at 7:52 PM

The condition of the gums ...

The Priest and his cock ...

Great stuff. Where do you find all this stuff?

I just exercise some patience and google and surf. I hold onto a lot of the jokes and pics for some time until I have enough of them that tie together in a theme.