Some Kind of Effin Eff-ort

After my rant in yesterdays post (see 'Nuff Said?) about freedom of religion, today I really needed to lighten up a bit! There's no future in boiling blood and elevated blood pressure!

For the following, I thought I'd set the tone with some loud bothersome rap music. I spared no expensive for the Deejay!

LONDON - A British high school student received credit for writing nothing but a two-word obscenity on an exam paper, because the phrase expressed meaning and was spelled correctly.

The Times newspaper quoted examiner Peter Buckroyd as saying he gave the student - who wrote an expletive starting with the letter "f" followed by the word "off" - two points out of a possible 27 for the English paper. 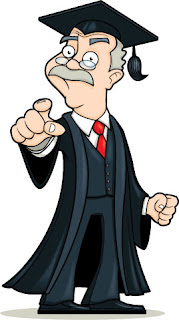 "It would be wicked to give it zero because it does show some very basic skills we are looking for, like conveying some meaning and some spelling," Buckroyd was quoted as saying.

"It's better than someone that doesn't write anything at all."

Buckroyd said the student would have received a higher mark if the phrase had been punctuated.

Buckroyd is a senior examiner for the Assessment and Qualifications Alliance, one of several bodies that grade British high school exams.

He said the expletive was used in 2006 by a student in response to the question: "Describe the room you are sitting in."
-ASSOCIATED PRESS

Do you suppose that this student will someday qualify as an examiner? Perhaps the teacher saw some latent potential in this lad? Could this kid someday become a member of Parliament? Or perhaps the Prime Minister?

If you ask me, the examiner appears to have the skill set for a career as a used hubcap salesman, much less as a teacher. As a case in point, take his statement "It's better than someone that doesn't write anything at all." Since when is "someone" an inanimate object? Have I been out of school so long that I'm under the misconception that "who" works better in the statement as proper grammar? It was an English exam after all.

Finally, every test I have ever taken required me to answer the questions correctly to get credit. I must admit I am mystified as to how "F*** Off" describes the room the kid was sitting in.

Since the student was given 2 points for his answer, I have to assume he was not sent to the Principal's office and thus no punishment was exercised.

Having been awarded credit on that paper, the lad must have found confidence for future exams. I can see it now, when on the next exam the teacher offers a question like: " What will you do on your summer vacation?"

Buckroyd will feel the student is making progress of course. This time the sentence was punctuated, ending in a period. The sentence will show that the student knows proper sentence structure in that he used the understood subject and predicate modifier for the complete statement: "(I will) f*** your mother." As a bonus, the statement actually answered the question!

The student will probably be awarded the full 27 points and pass the class.

No.1398
Curmudgeon responsible for this post: Hale McKay at 8:31 PM

Un-effin-believable! Although things like this shouldn't come as a surprise to anyone. I realize that this happened at a school in England, but I'm afraid the same kind of stuff happens in the school systems in this country too.

I like how you projected an imaginary scenario after the story itself. Sadly, I think you are right on.

Do you really think teachers in the U.S. would grade a paper like that?

If so, our education system is really going down the tubes more than I thought.

People who use "that" instead of "who" drive me up a wall. Several times I've found a fascinating article with a title along the lines of "6 Writers That Drank Too Much" AAARGH! So instead of using the title, I'll make a sentence: "Here's an article about six authors who drank too much."