People ask me if I wake up grumpy in the morning. I reply, "No, I just bring her some coffee in bed."

I went to the doctor and complained, "Everytime I drink my coffee, I get a stabbing pain in my eye." He said, "Well. have you tried taking the spoon out of the cup?" 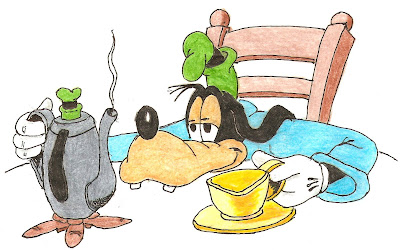 Joe. Java. Go-go Juice. A cup of ambition. Coffee.
Doesn't it seem that everything we enjoy nowadays is harmful to our health?

They say too much coffee isn't good for us. Who are they and what are they doing snooping in my kitchen? If they were paying attention they would see an amazing transformation, wherein a half-asleep grumbling useless zombie becomes a wide awake grumbling useless human when copious amounts of that hot liquid is sent cascading down his throat.

If as they say I am slowly committing suicide cup by cup, then would it not follow that Starbucks® and Dunkin' Donuts® are guilty of executing mass genocide?

Let us pray.
A COFFEE PRAYER

Caffeine is my shepherd; I shall not doze.
It maketh me to wake in green pastures;
It leadeth me beyond the sleeping masses. It restoreth my buzz.
It leadeth me in the paths of consciousness for its name's sake.
Yea, though I walk through the valley of the shadow of addiction,
I will fear no Equal™: For thou art with me;
Thy cream and thy sugar they comfort me.
Thou preparest a carafe before me in the presence of The Starbucks®;
Thou annointest my day with pep; my mug runneth over.
Surely richness and taste shall follow me all the days of my life
And I will dwell in the House of Juan Valdez forever.
Amen 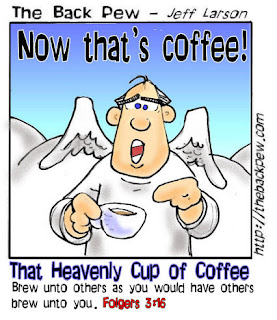 Have Another Cup
A nervous patient in the doctor’s office and asks for advice, "Doctor, what should I do? Every time I come home from work, I see some strange man in bed with my wife. When I start yelling at her, she just locks me in the kitchen and tells me to calm down and drink a cup of coffee. This has been happening every day for the last four months."

The Doctor replies, "So how can I help you?"

"I just want to know - am I drinking too much coffee?"

And That's To Go
Freda was eighteen years old, friendly, and eager to do things right. Unfortunately, being blonde, she wasn't especially bright.

She had just started her first job, as a secretary and general go-fer at a corporate office. Her first task was to go out for coffee. She walked into a nearby coffee shop carrying a large thermos. When the counterman finally noticed her, she held up the thermos. "Is this big enough to hold six cups of coffee?" she said.

The counterman looked at the thermos, hesitated for a few seconds, then finally said, "Yeah. It looks like about six cups to me."

Top Ten Ways I like My Coffee
10. Hot
9. Hair-free
8. Non-crunchy
7. One barrel at a time
6. Doughnut-enabled
5. So caffeinated it jumps out of the cup and slaps me
4. Sucked straight out of the filter
3. Intravenously
2. Strong enough to sit up and bark Rowf!
1. With a 12-course breakfast.

The Coffee Maker
Cousin Elly, another blonde, is the world's worst at getting instructions mixed up.

When she got married her husband bought her one of those fancy, electric coffee makers. It had all the latest gadgets on it.

Salesman Riley carefully explained how everything worked; how to plug it in, set the timer, go to bed, and upon rising, the coffee is ready.

A few weeks later Elly was back in the store and Riley asked her how she liked the coffee maker.

"Wonderful!" she replied, "However, there's one thing I don't understand. Why do I have to go to bed every time I want to make a pot of coffee?"

You Know You Are
Addicted To Coffee If...
* You sleep with your eyes open.
* You have to watch videos in fast-forward.
* The only time you're standing still is during an earthquake.
* You can take a picture of yourself from ten feet away without using the timer.
* The Taster's Choice couple wants to adopt you.
* The nurse needs a stop watch to take your pulse.
* You grind your coffee beans in your mouth.
* You can jump-start your car without cables.
* You walk twenty miles on your treadmill before you realize it's not plugged in.
* You've built a miniature city out of little plastic stirrers.
* People get dizzy just watching you.
* Instant coffee takes too long.
* You channel-surf faster without a remote.
* You short out motion detectors.
* You introduce your spouse as your coffeemate.
* You don't even wait for the water to boil anymore.
* You answer the door before people knock.
* Your birthday is a national holiday in Brazil.
* You have a bumper sticker that says: "Coffee drinkers are good in the sack."
* You can type sixty words per minute... with your feet.
* When someone says: How are you? You say: Good to the last drop
* You haven't blinked since the last lunar eclipse.

A Rejected Commercial?
Two woman were fighting in the supermarket. One quickly grabbed a jar of Folgers coffee, opened it and dumped it down the other woman's blouse.

The lady asked, "Why did you do that?"

The other lady's response was, "There's nothin' better than waking up with Folgers in your cup."

A New Creamer?
A lady came into the kitchen, sat down at the table, leaned forward, put her head in her hands and said to her husband "Honey, I feel terrible! My head hurts, my back's killing me and my left breast just burns and burns."

He said "I'm gonna help you, Dear. I'll get you some aspirins for the headache, I'll rub your back with Myoflex for the backache, and if you'll sit up and get your breast out of the coffee, it'll stop burning!" 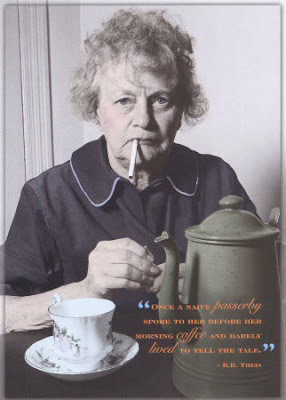 With some people, it is advisable
not to strike up a conversation
until after they've had their coffee.
Do you ever talk to your cup of coffee? I had an argument one morning with mine. It started out as A Conversation With Joe.

On that note, I'll close and go for my second pot of the morning.

No.1442
Curmudgeon responsible for this post: Hale McKay at 8:09 PM

From the foist cuppa char I had, I have ALWAYS liked my coffee hare-free. I don't like to share with a rodent.

I think I'll join ya and pour another cup for myself.

I've already been up for nine hours (half past noon here)and I think I've had a cup of coffee during every one of them. Lil jittery here - LOL

Thanks for the laughs! Best wishes to you for a great day!

You were up at 3 AM? I'd have been drinking all that coffee too!