File this under: "The Best Laid Plans of Mice & Men" 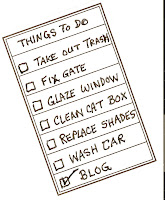 As you see by the graphic at the left, I had an ambitious slate of duties to accomplish for this Saturday, 8/16/08.

A close inspection of the list however, would suggest that I was less than productive and unsuccessful in attaining my goals. While I am a devout follower of that religious ideology known as "Procrastination," it was not my adherence to the faith that prevented me from fulfilling my obligations.

As ironic as it may seem, it was divine intervention, an act of God if you will, that prevented me from performing the listed chores. The fast moving dark clouds gave a foreboding appearance to the firmament. Distant thunder heralded the storm that had caused local meteorologists to issue a severe storm watch for most of the day. Their forecast warned of thunder and lightning, gale force winds, driving rain and dime-sized hail in most areas.

In review: Items on the "To Do" list that required being outside, i.e., fixing the gate and glazing the window, were obviously out of the question. (I am compelled to take at least half-credit for washing the car.) I found myself hesitant to be standing in a window to replace the shades in the face of severe lightning. I could have cleaned the cat box easily enough and could have deposited the litter into the trash. Since I wasn't going to subject myself to be pelted with dime-sized hail or be soaked in driven rain, the trash would have to wait.

In spite of the excuses being legitimate, I was apparently the only one who felt that it was a good thing.

This disagreement, however did lead to an interesting discovery: The relationship of a certain word and a seemingly unrelated phrase.

Ambition and Am Bitchin'
- She said, "I am bitchin' because of your lack of ambition."

As for the "Things To Do" list, it was, has been deferred to Sunday.

Any one know where I can sign up for a quick lesson in rain dancing?

No.1438
Curmudgeon responsible for this post: Hale McKay at 6:54 PM

I prefer your comics to my Sunday paper. Since I was a huge reader of Superman comics, the Superdog comic was terrific.

Now, I have to go back and catch up on Echoes.

Thanks for the cartoon compliment. I never realized it before, but Missy kind of resembles Krypto, doesn't she?

The next chapter of "Echoes" will be posted tomorrow. You do need to be caught up.