∴
Welcome to the ≡ Picayune Tribune ™ ≡
Featuring news that's not worth wasting the ink to print it.
◊ Exclusive Interview ◊ 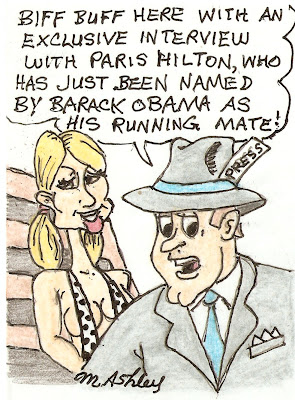 † Biff Buff, our overpaid and under worked political beat reporter, to our surprise, has scooped the national newspapers. He is the first on the scene to interview Ms Paris Hilton.

Buff: The world has already heard the news that you have been chosen to be Barack Obama's running mate. The news has shocked the political circles. How do you feel, Ms. Hilton?

Paris: Call me Paris, Buff. How do I feel? Honestly? Hungover.

Buff: Hungover? Oh, you mean you're hung over with euphoria.

Paris: No, from tequila shooters. Say, what's in a euphoria anyway?

Paris: Oh. You mean like how you feel after having sex?

Buff: Well, yes. You could say that.

Paris: Then make mine a double!

Buff: Paris, I meant how do you feel about being named the Vice Presidential candidate for the Democratic Party?

Paris: Helllooo! It's a party. I'm so there!

Buff: What qualifications do you possess? Do you think you'll make a good Vice President?

Paris: Buffy ... Can I call you Buffy? I know all about vices.

Buff: So you do. Tell me, what do you think of Barack Obama the man? Is he a hard man to get to know? 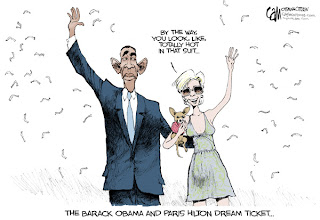 Buff: As Vice President there will be times when you and he will have to have private meetings behind closed doors. Do you think you'll be able to handle it?

Buff: Of course you are! Part of a Vice President's job is dealing with various heads of state. Are you prepared for such responsibilities?

Paris: (Reaches into her handbag and pulls out a bottle of blue liquid.) Yes. I always carry Listerine with me. I never know when I'll be needing it.

Buff: Your social life has been the focus of news reporters for some time. Will you be able to tone down your night life once you're in a public office as highly visible as one in Washington D.C.?

Paris: If you mean am I going to become a wallflower ... Hell no!

Buff: The office will require to you be dressed in a more formal and conservative manner. Will this be a problem?

Paris: Why? What's wrong with the way I dress?

Buff: Well ... Take that outfit you're wearing now, or rather, almost wearing now. I mean, you're almost falling out of it.

Paris: Really? (Sits up, shakes her shoulders and looks down at herself.) Oh wow! One of my boobs popped out! (Shakes again.) Oh, look! Both of them are out now.

Buff: So they are ... Both of them! Er ... Uh ... Now do you think that would be appropriate to have happen if you were entertaining ... say, the Queen of England or some other foreign dignitary?

Paris: You mean, like, they've never seen a great pair of boobies before? (Uncrosses her legs.) 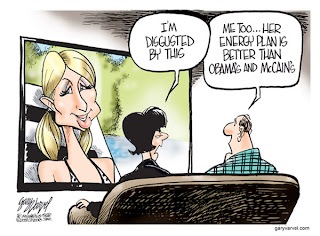 Paris: Helllooo! It's 90 degrees out.

Buff: Paris, I'm no prude, but it's undignified and maybe even unsanitary.

Paris: Oh, I make sure I'm protected. I use citronella.

Buff: What? Citronella? What ever for?

Paris: I just rub the stuff all over me ... Especially in those certain sensitive places.

Buff: But wouldn't that stuff burn or irritate?

Paris: Sure ... But why I should care what happens to the flies?

Buff: Uh ... Shall we change the subject? I didn't want to go there.

Paris: You don't want to? You're hurting my feelings.

Paris: Great idea! Why don't you make us a couple of those euphorias?

† Editors Note: Biff Buff, the reporter responsible for the previous candid interview with Vice Presidential candidate, Paris Hilton, faxed in the story three days ago and has not been seen or heard from since. It can only be assumed that he is conducting a more in depth and intimate interview with Ms. Hilton, and further accounts of this exclusive will be forthcoming.

No.1439
Curmudgeon responsible for this post: Hale McKay at 6:40 PM

The Skunkster has his own announcement upcoming about Ms. Hilton and her recent presidential dabblings ;)

I look forward to it.

I LOVE it!!! The cartoons are great.

LOL! I'm glad you enjoyed it.

Thanks again for the kind words on my cartoons.