Today I tuned in for the first time to Olympics coverage on television. I watched about fifteen minutes of the U.S. Olympic Basketball team (aka the NBA) routing the Chinese team led by Yao Ming. That was the extent of my Olympic viewing until later in the day.

I had some athletic contests of my own in which to participate, although they were non-medal events. There was pulling and pushing. There was bending and stretching. Strained muscles and aching limbs protested to the physical demands on them. There was the fear of dehydration from the heat of the afternoon August sun.

Not to be overlooked was the looming specter of the heavily favored challenger - Mother Nature. The foreboding facades of dark cumulonimbus clouds were visible in the southwestern sky, marking her charge into the fray.

So I pulled and pulled on the lanyard to get the lawn mower started so that I could push it through the high grass. Next I was bending and stretching, wielding the hedge clippers like an Olympian fencer. Soon I resembled a track and field athlete swinging the hammer as I swung the weed whacker around where the lawn mower could not reach.

Muscles and limbs more inclined to a leisurely pace cried foul that there were no ten minute recesses. Sweat glands normally presupposed to cooling trickles were called upon to exude streaming rivulets.

Previous bi-weekly Yard Olympiads would under normal circumstances feature artistic movements with attention to style points. These games were different. This time finesse would be sacrificed in the face of the challenge from such a formidable foe.

The hedges and shrubs had been trimmed. The lawn had been mowed and the grass had been edged. The clippings had been raked and bagged. The mower, hedge clippers, weed whacker, rake and extension cords had been stowed in the shed. I had completed the competition with mistake or foul.

As I stood victorious upon the podium under the shelter of my back porch, my opponent went into a fit of rage. Now overhead, the black anvil-shaped cloud let loose a torrent of gale-swept rain. For good measure she froze some of that water and hurled dime-sized hail upon the venue. Not accustomed to losing at these Yard Olympic Games, Mother Nature had a climatic hissy fit. It was a classic case of her version of PMS, Post Meteoric Syndrome. 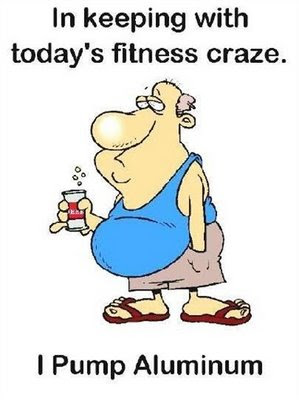 The last three of these games saw me losing to her. Her rains and winds had prevented me from completing the events.

All that training had finally paid off ...

After a nice hot and soothing shower using the pulsating spray, I was able to settle down and relax. I returned my attention to the Olympics.

OLYMPICS? WTF? What greeted my sore eyes? DUBYA! George W. was sitting next to Bob Costas. They were discussing the Olympics, especially where world politics could be inserted into the conversation. Talk about photo-ops ....!

After that Olympic moment I caught some of the womens gymnastics and the mens and womens swimming events. I'm finding that my interest level for these Olympics isn't really that great. Let's see, some of the events featured so far ... fencing, synchronized diving, volley ball ... and oh yeah ... all those network and sponsor breaks!

Since I was comfortable in my Lazy Boy, I decided to keep a log of the games for one hour. I discovered that the advertisers are probably on a world record pace to record the most Olympic commercial minutes ever! From 9:45 PM to 10:45 PM, EDT, there was 29 minutes of Olympic coverage and 31 minutes of commercials! With a full two minutes lead, do the Olympic Games stand a chance of catching the ads?

No.1432
Curmudgeon responsible for this post: Hale McKay at 7:21 PM

I haven't competed in the Lawnmower Olympics in 8 1/2 years.

My last competition in the snow removal Olympics was in January '07.

I'm getting very competitive in the 'sit on my ample ass' Olympics; I might actually medal by the 2010 Winter Games ;)

I would have taken the ads without your mathematical genius. Just stands to be -- somehow the Games has got to be paid for.

Alas, I also compete in Snow removal Olympics too.

You are right of course. But I would never thought that the commercials would actually outweigh the actual programming.