One Day at the Shore

What ever happened to the WASPs anyway? You seldom hear the term anymore. It's curious because they are the most privileged, influential and wealthiest minority in U.S. society. Why, they are probably the only minority that has never suffered prejudice because of race or religion.

Growing up I knew the acronym to stand for either We Are Selfish & Pompous or the less complimentary We Are Selfish Pricks. Of course, it actually stood for White Anglo Saxon Protestant. The American Heritage Dictionary's definition: WASP - a white U.S. citizen of non-specific or religious identity.

They never went anywhere. They are still out there. They are still parenting spoiled and "want-not" preppie children. They are the bankers, the wealthy politicians, the high-ranking military officers, the industry magnates, etc. Their prominent names include the Hiltons, the Gores, the Bush's, and the Clintons, to name but a few.

The WASPs of olden were of the old blue blood money and they passed their fortunes and empires on to their scions. WASPs tended to marry into other WASP families, seldom approving of non-WASP intrusions. WASPs were easily recognizable as they lived in the biggest and fanciest homes, drove the biggest and fanciest automobiles, and wore the most expensive clothes. It would not be atypical for a WASP who owned the best of everything, to hesitate or to cringe at the prospect of having to leave a tip to someone who provided them a service.

It appears that the WASP's prominence in society has taken a back seat to a whole new breed of rich and influential people. The WASPs appear content to let these upstarts dominate the public eye, while they sit back and enjoy their volumous wealths and keep getting richer.

Their replacements, the new order is comprised of those who came not from inherited monies, but from meager if not poor backgrounds. They are the young professional athletes, TV and movie stars and starlets, musicians, electronic geeks, Dot-Com pioneers, etc., who have become overnight multi-millionaires.

I guess this new breed should, instead of "WASPs" be called something else; perhaps BEEs or FLEAs or HORNETs or GNATs or GRUBs or CHIGGERs?

I want to wax nostalgic and resurrect some of that dated WASP humor, circa the 1970s-1980s. (Funny, but some of these jokes are still around. "WASP" has simply been replaced with: Yuppie, Bimbo, Blonde, Redneck, Moron, or some ethnic group.) 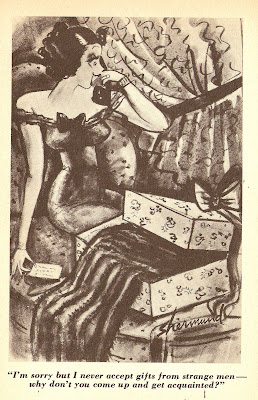 "Wow," whispered Jacqueline to husband Palmer, as they entered the theater, "look who they've got tonight. My favorite actor - Nosmo King." She pointed to an electric sign.

"I wanted to fix you a nice martini," she sputtetred. "I started out by rinsing off the ice cubes in hot water, and now I can't find them."

≡
When Jennifer turned fifty, she went to her doctor for advice on reducing her midsection. He advised that she exercise by raising her feet over head ten times before she got out of bed. She started the next morning while hubby Tyler, still hungover and half asleep, was in the bathroom shaving.

On the third repetition of the exercise, Jennifer caught her feet in the grillwork on the head of the brass bed and was stuck. She screamed for help.

Tyler stumbled into the room with his face lathered and squinted at her. "For God's sake," he mumbled, "comb your hair and put in your teeth! You look more like your mother every day!"

No.1444
Curmudgeon responsible for this post: Hale McKay at 7:45 PM

LOL...WASPs think lightning is someone taking their picture...

"For God's sake," he mumbled, "comb your hair and put in your teeth! You look more like your mother every day!"

That leads to all sorts of imaginings. snerx!!

I liked that one too! I've known quite a few WASPs in my day and that one and the one about the rain getting in their nose are so true.

Well, with her upside down and her legs in the air - I can't get past that imagine to imagine anything else.

Hilarious! LOL. The term WASP is still used in Toronto perhaps because the place is crawling with self-impressed, grasping WASPs - that's probably redundant :)