Those posts and hits do not reflect the 203 entries at Verbicidal Tendencies, the 47 entries at Suppository For the Soul* and the 70 at Footloose and Fantasy Free**.

*Suppository For the Soul - contains material of a strong adult nature that I wouldn't put on this site, and as such has been flagged accordingly.

**Footloose and Fantasy Free - is a 360 Yahoo blog which contains mostly some jokes that are duplicates found on the other sites.

To all who come hear, those who comment and those who don't, thank you for your patronage. I hope to make the next 1500 posts even more enjoyable with more original short stories and original cartoons, as well as the usual smattering of jokes, satire and parodies.

To quote the Bartles & James spokesmen, "Thank you for your support." 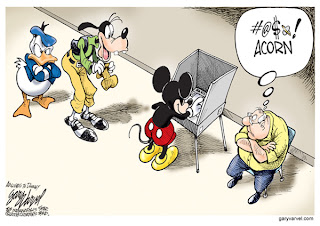 There are only 14 schlepping days left before the election.

A record number of the deceased have registered to vote thanks to the diligence of ACORN. Tourist mecca Disneyland was well represented at one registration office.

It's true, the nut doesn't fall far from the tree. 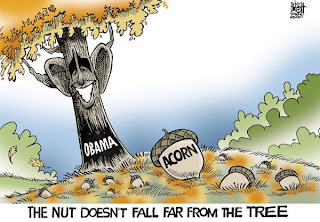 Rocket J. Squirrel flew on over to the Obummer camp. He was joined by his friend, Bullwinkle a long-time Republican.

Said the moose, "I switched parties because I was afraid that Palin woman would shoot me."

The number of young voters being registered has also increased. When one young new voter was asked for whom he would his cast his vote, his answer was unintelligible because he didn't bother to remove his pacifier from his mouth.

With his "15 minutes of fame" slipping away, Joe the Plumber is considering throwing his hat in the ring as a late third-party candidate for the Presidency. He would be running on a "Butt Cracks Are Beautiful" platform. He said he was tired of seeing John McCain adopting his persona. 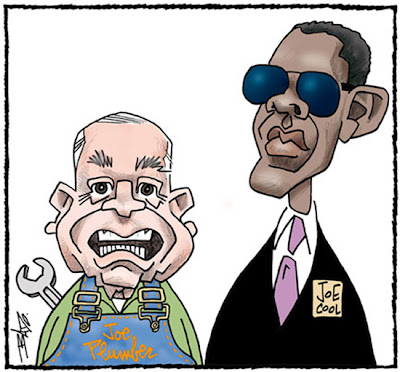 Mario and Man In Black, J 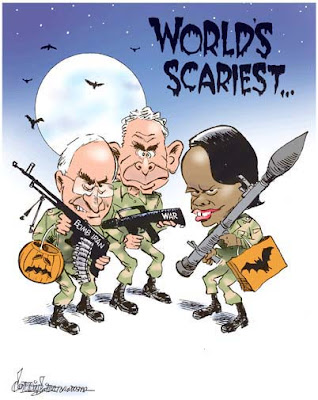 Storm Troopers
...And the Scariest of All: 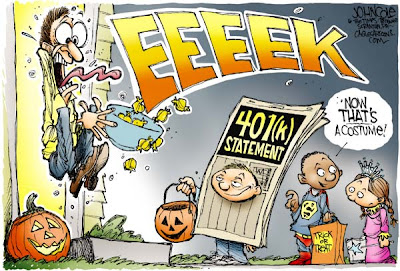 No.1500
Curmudgeon responsible for this post: Hale McKay at 8:38 PM

Since I have already voted by mail (my one legitimate vote, versus the multiple votes by made-up liberal voters), I have now tuned out all campaign crapola ;) Blissful silence, at least until November 5, when the damage must be reckoned with LOL...

Congrats on your upcoming milestone.

As for the election. I'm so sick of all of it. ACORN should be ashamed of themselves. Just saying. Desperation at its finest.

Did I mention I voted yesterday? It's all over for me.

I haven't voted yet, but I have already made my decision and tuned out the political B.S.

I wish I could tune out all the B.S. myself.

That's a sad but true commentary on our country's political system.

It's over for you too - Florida gets to set the wheels of fate in motion.

My mind keeps getting set and reset as to whom gets my vote.

Can I write-in the Michelin Tireman?

Yes, ACORN isn't presenting itself as exactly honorable, are they?

Well done, mate
1500 and going strong
Its a pleasure to read every day
Cheers from down under

I enjoy my reading sojourns down under via your blog.