The following "dumb" questions have been kicked around all over the blogosphere in one form or another. I was thinking they would serve as as a good set question to be asked of our Commander-In-Chief. (Also, I couldn't come up with anything fresh for this post.) 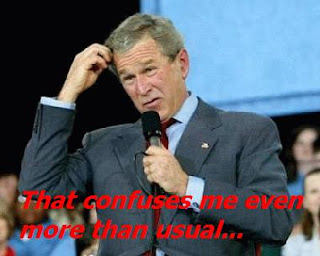 Do fish think they're wet and we're dry, or do they think that we're wet and they're dry?

Do you need a silencer if you are going to shoot a mime?

If nothing ever sticks to TEFLON, how do they make TEFLON stick to the frying pan?

If superman is so clever, why does he wear his underwear on the outside?

Why are there floatation devices under plane seats, instead of parachutes?

Why do they put braille dots on the keypad of the drive up ATM?

Why do we drive on parkways and park on driveways?

Why isn't phonetic spelled the way it sounds?

Why do you need a driver's license to buy liquor when you can't drink and drive?

Have you ever imagined a world with no hypothetical situations?

How does the guy who drives the snowplow get to work in the mornings?

You know that little indestructible black box that is used on planes, why can't they make the whole plane out of the same substance?

Why is it that when you're driving and looking for an address, you turn down the volume of the radio? Is it gonna make you see better?

When a crash-test-dummy hits his head, and no engineers record the results, does he make a sound?

Why are there Interstate Highways in Hawaii?

If a cow laughs, does milk come out of it's nose?

What is the sound of one hand clapping?

If an unstoppable force meets up with an immovable force, what happens?

Why do they sell cigarettes at gas stations when you cant smoke there?

If a piece of toast always falls butter side down and a cat always lands on its feet then what would happen if you dropped a cat with a piece of buttered toast strapped on its back?

If you are driving the speed of light and you turn on your headlights, what happens?

Why does a record player play at the same speed when the revolutions get faster when the needle goes further to the inside of the record?

If you throw a cat out a car window does it become kitty litter?

If corn oil comes from corn, where does baby oil come from?

If there is no God, who pops the next Kleenex out of the box?

How do they get a deer to cross at that yellow road sign?

If it's tourist season, why can't we shoot them?

What's another word for thesaurus?

Why do they sterilize the needles for lethal injections?

Why is abbreviation such a long word?

Why do kamikaze pilots wear helmets?

How do you know when it's time to tune your bagpipes?

Is it true that cannibals don't eat clowns 'cause they taste funny?

When you choke a smurf what color does it turn?

Why do they call it a TV set when you only get one?

Do radioactive cats have 18 half-lives?

What was the best thing BEFORE sliced bread?

Why doesn't glue stick to the inside of the bottle?

Is it possible to be totally partial?

If a book about failures doesn't sell, is it a success?

Why do doctors call what they do practice?

No.1501
Curmudgeon responsible for this post: Hale McKay at 9:21 PM

"Why are there Interstate Highways in Hawaii"

They haven't yet figured out how to keep the Interstates from Seattle, Portland, San Francisco and Los Angeles from being inundated by water.

Good list Mike, I can't think of any you missed although no doubt there are more.

There are tons more of them.