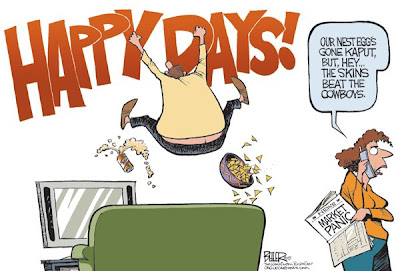 We are bound by the calendar, slaves to the clock in a world where we are expected to do something five minutes ago. I once had an office manager who operated like that.

I remember one time when he dropped a report on my desk for me to look over. He said, "After you read it, call me ASAP."

Fifteen minutes later I called him in his office. When he answered I said, "You are a sap."

It doesn't matter how hard we try to control time, in the end we must succumb to its passage. That office manager didn't say I should use brevity to get back to him. "As Soon As Possible" afforded me some leeway. I could have taken my sweet time and claimed that I called at the first possible chance. 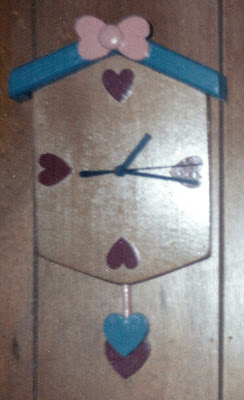 (The clock pictured at the left was one I made for my wife several years ago. Hmmm ... It's been two weeks and I still haven't replaced the battery.)

Glancing up at the clock on the wall I noticed there were four wooden hearts representing four 15 minute parts of an hour. You know, the number four comes up a lot in our lives. There are are 4 quarters in a dollar, 4 quarters in a fiscal year, and the interest in my savings account is compounded quarterly.

This time of the year are no less than 4 NFL games aired on TV - and a regulation game consists of 4 quarters! There are about 4 weeks in each month. The Olympics: the Summer Olympics are played every 4 years, as are the Winter Olympics.

Every 4 years there is a Leap Year and February is rewarded by having a 29th day added. Alas and alack, Leap Year also means that every 4 years the Presidential elections dominate the news ... but you knew that!

Before you ask, I haven't a clue what's the idea behind all those "interesting" points about the number 4! I'm sure you must be sitting in front of the screen waiting and squirming for me to get to the point.

Well, the point is this: There is no point! 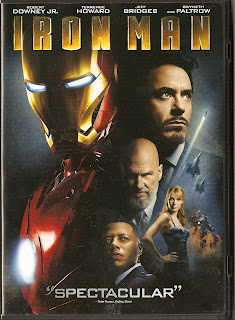 I will make this point:

I finally sat down and watched a DVD I bought this past Tuesday:

Iron Man
In the genre of Super Hero movies, Iron Man ranks right up there with the Spider Man movies. It's a great actioner.

It's almost 10PM here on the East Coast. It's time to settle in front of the TV again and to watch the second game of the ALDS and root the Red Sox on to a victory and a 2-0 lead in the best-of-five series against the Los Angeles Angels at Anaheim.

That clock ... I finally changed the battery!

No.1483
Curmudgeon responsible for this post: Hale McKay at 9:32 PM