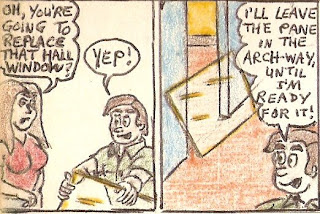 LAS VEGAS - In a city where luck means everything, O.J. Simpson came out the big loser — and his unlucky number in a case full of bizarre twists was 13.

He was convicted of an armed robbery that happened on Sept. 13 and was found guilty on the 13th anniversary of his Los Angeles murder acquittal of all 12 counts against him. The Las Vegas jury deliberated for 13 hours after a 13-day trial. He could be sentenced to life in prison. 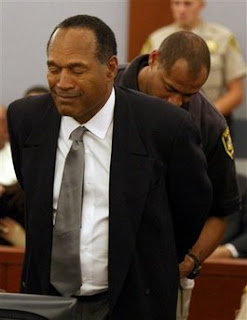 O.J., Can You See?
And then, as only the sobs of Simpson's sister broke the silence late Friday, the lights went out.

Court marshals flipped on flashlights and shouted for everyone to stay seated. Only the judge knew what had happened. It was 11 p.m. and the courthouse lights had shut down automatically.

"Timed out," Judge Jackie Glass said in a fitting epitaph for the story of O.J. Simpson, which has long haunted America.

The 61-year-old Hall of Fame football star was convicted of kidnapping, armed robbery and 10 other charges for gathering five men a year ago and storming a room at a hotel-casino to seize Simpson sports mementos — including game balls, plaques and photos — from two collectors. Prosecutors said two of the men with him were armed; one said Simpson had asked him to bring a gun.

It's ironic that a man who got away with cold-blooded murder would finally be put away over some sports memorabilia!

O.J., can you see that it was your arrogance that finally brought you down?

O.J., can you see that the penitentiary only sells soap on a rope?

O.J., can see when they turn out the prison light,
Who's poking your behind in the middle of the night?

No.1484
Curmudgeon responsible for this post: Hale McKay at 7:23 PM

O.J., Can you see that assholes always get it in the end?

Gee, Hale, why don't you tell us how you really feel? snerx!

All good things come to those who wait.

Arrogance will take you only so far, and then a new map is put in place. Too bad O. J. didn't realize he was the cartographer before he started down his road to hell.

Keep up your good works.

btw, remember to vote for Obama.

I heard on the news this a.m. that his lawyer is going to appeal, based on the fact that there were no African-Americans on the jury and some of the jury are expected to have voted guilty based on the previous trial and not this one. Hogwash!

This time, though, there was to be no miraculous escape for OJ in the face of overwhelming evidence. He has become, at long last, a convicted criminal.

The post title was precious. Justice has been served.

LOL! Was I that obvious?

YES, an appeal was to be expected, and on those grounds. AS long as there is an opening to play the race card someone will play it.

Let's hope that evidence means that any appeals will all be denied.

IT was a fitting title.

are you saying that O.J. will be perfect for the prison football team because so many will like his tight end?

Actually it was inference that he'd make a good wide receiver.