According to the U.S. Census Bureau:

...And you are sitting there reading this blog. (Me too.)

If you yelled for 8 years, 7 months and 6 days you would have produced enough energy to heat a cup of coffee. (At that rate, my wife will put Starbucks out of business sometime next week.)*

Due to the angle at which the optic nerve enters the brain, staring at a blue surface during sex increases the intensity of orgasms. (Would this color blue match the window treatments in the bedroom?)

There are men in Guam whose full-time job is to travel the countryside and deflower young virgins, who pay them for the privilege of having sex for the first time. Reason: under Guam law, it is expressly forbidden for virgins to marry. (I wonder, are they hiring?)

Sex is biochemically no different from eating large quantities of chocolate. (No wonder she calls those candy bars, "darling.")

The word “gymnasium” comes from the Greek word gymnazein which means “to exercise naked.” (There's nothing like a good workout. The more reps the better.)

Sex burns 360 calories per hour! (Let's double up those reps!)

Turkeys can reproduce without having sex. It’s called parthenogenesis. (So that's what quitting "cold turkey" means.)

Humans and dolphins are the only species that have sex for pleasure. (Just call me Flipper.)

The first couple to be shown in bed together on prime time television were: Fred and Wilma Flintstone. (Yabba-dabba-doo!) 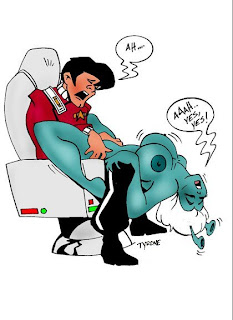 Silly Putty was "discovered" as the residue left behind after the first latex condoms were produced. (It's no fun being malleable.)

Sex is the safest tranquilizer in the world. It is 10 times more effective than Valium! (Take me and call me in the morning.)

I wonder ... what happened on TV the most - James T. Kirk bedding some alien female or Jack Bauer killing someone?

Curmudgeon responsible for this post: Hale McKay at 9:10 PM

I saw a sign someplace that said "Sex burns 4 calories a second".

Underneath the printed words, someone had scrawled in big black magic marker, "THEN YOU'RE NOT DOING IT RIGHT!!!!"

But even if the 360 cal/hr figure is somewhat closer to accurate, that tends to 'splain why I'm getting fat and out of shape... (DOH...I'm at the computer!).

You should put a red asterisk by the Guam virgin note.

I think that line was said by one the celebrities on Hollywood Squares when Peter Marshall asked True-False about the number of calories burnt during sex.

(DOH ... And I was sitting at the computer writing and posting the piece.)

I think you're right.

Hey, somebody's got to hold down the fort while everyone else is out there doing it.