Marty had been squinting through the knothole in the fence surrounding the Magistrate's house for over an hour. He had seen things he had never imagined before. The naked men and women were engaged in strange acts and positions. Their arms and legs were wrapped, bent and contorted in ways that must have been painful judging from the screams and moans of the participants. At one point he thought a large breasted woman was trying to kill one of the men; she was straddling him in such a way as if to suffocate the poor man!

Ever since his voice had changed five years ago he had been feeling changes within his own body. Although the temperatures in Nazareth never dipped below 50 degrees in the summer he would often wake up with a certain part of his body frozen solid. He soon found that he could "thaw" it by vigorously rubbing and manipulating it, and it felt good despite the ensuing mess.

He noticed too that the girls his age seemed to be different. This was apparent when he used to sneak through the bulrushes down by the river and watch the girls bathing in the water by the banks. He had begun to put it all together when he realized that "freezing" process would occur while he was involved in his acts of voyeurism. It happened one day while watching the girls bathe and simultaneously thawing himself that he had had an epiphany. The birds were singing in the trees above, bees were buzzing around him and himself defrosted - that's when he developed his 'birds and bees' theory of life.

So it was that night he walked bow-legged away from the Magistrate's property and knocked on the bedroom window of the fair Josephine. He had been attracted to her for some time and even though she'd often smiled and winked at him, he'd never had the nerve to ask her out.

They slipped over to the Magistrate's home and he showed her the knothole. Her face flushed and she giggled as she partook of the debauchery beyond the fence. She told him he could kiss her if he wanted as long as it was just a peck. Their lips brushed and then she suddenly grabbed his head and held him tight. The next thing he knew her tongue was seemingly trying to wash his tonsils.

Words were not needed by that time. He grabbed her hand and they tiptoed past a pair of stallions connected to a parked chariot. Nearby lie a Centurion passed out, several bottles of wine on the ground beside him. They grabbed some of the wine, hopped onto the back of the chariot and rode off into the night.

After a mile or so he said, "You're not going to believe this, but we're out of grass." She looked at him confused and he said, "The horses need to graze, you know, to build up energy."

She smiled and picked up a couple of the bottles of wine and said, "Maybe we should build up some energy too."

Soon, by the light of a full moon they were making out heavily. Touching became groping and it wasn't long before their articles of clothing were strewn about. He crawled over her and started to ease himself down when she cried out, "STOP!" 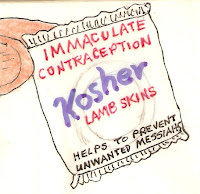 "What's wrong?" he asked her in frustration. "Aren't we going to do it?"

She looked down at his "frozen" condition and nodded, "Yes, but not without protection. You do have some ... uh ... protection don't you?"

"Of course I do," he replied cheerfully.

He reached into his shirt and pulled out a small foil package and held it up for her to see. "I never leave home without it."

She watched as he struggled to open the package and said, "Tell me, Marty, just how long have you been carrying that thing around in your pocket?"

"I just got it today," he lied for he'd taken from his father's drawer over a year before. Not wanting to sound too self-assured he added, "Just in case we ... You know."

Can you guess where this heading?

(To be continued in part 2: Angel With Good Tidings .

Nah, I have no clue. I guess I'll just have to stop by tomorrow to find out.

In the meantime, it seems to be getting cold in the nether parts. I have to go get warmer. snerx.

Ignorance is bliss, so I'll have to come back for Part II, to maintain my bliss..

BTW..is there a line at the knothole? ;)

I'm feigning ignorance too. I'll be back tomorrow. Don't the post title have anything to do with this? Just asking. Have a great day. :)

It will become much clearer in the next chapter.

Freezing and thawing ... when does it end?

Hmmm ... I thought the clues were there. Maybe no one wants to go there ...

Yep. The post title most certainly have something to do with it.

I just have no idea whatsoever where this is headed, so I'll have to check back.:-)

Oh, you will know in the next installment.