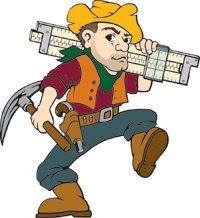 There was a time when the Slide Rule ruled supreme. It's heyday was long before the Personal Computer. It even preceded the pocket calculator. Today, it is an all but forgotten relic of the 50s and 60s.

The nerds of that era not only sported pocket protectors, but few were those who would be caught without a slide rule holster hanging from their belts.

Not being particularly proficient in mathematics, I struggled with square roots, I never really learned how to use a slide rule. In high school I took only the math classes required in order to graduate, thus avoiding Algebra, Geometry, Physics and (gasp) Calculus.

Students today are not only allowed to have calculators in the classroom (we were not) they are indeed required. Scarce among today's students are those who even know what a slide rule is, much less know how to use one.

A while back I found the following composition while surfing humor sites. I copied it and filed it away for future use, although I doubted at the time that I'd ever use it.

I'll go out on a limb and say that the author (no credit was given) of this piece probably would know how to use a slide rule, and is more than likely quite proficient at it.

I thought I was going to need an unabridged dictionary at hand when I started reading it, but quickly realized it was unnecessary. The author's clever use of mathematical and scientific verbiage in the place where more "colorful" words would be expected, lends itself to an easy read. Even if you don't know a cosine from a tangent, you should it find enjoyable and simple enough to extrapolate. 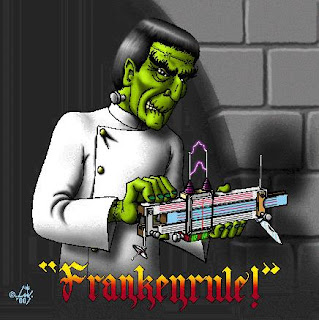 Wherein it is related how that Polygon of Womanly Virtue, young Polly Nomial (our heroine) is accosted by that Notorious Villian Curly PI, and factored (oh horrors!).

Once upon a time (1/T) Pretty Polly Nomial was strolling across a field of vectors when she came to the boundary of a singularly large matrix. Now Polly was convergent and her mother had made it an absolute condition that she never enter such an array without her brackets on.

Polly, however, who had changed her variables that morning and was feeling particularly badly behaved, ignored this condition on the basis that it was insufficient, and made her way amongst the complex elements. Rows and columns closed in from all sides. Tangents approached her surface. She became tensor and tensor. Quite suddenly, two branches of a hyperbola touched her at a single point. She oscillated violently, lost all sense of directrix, and went completely divergent. As she reached a turning point, she tripped over a square root that was protruding from the erf and plunged headlong down a steep gradient. When she rounded off once more, she found herself inverted, apparently alone, in a non-euclidean space.

She was being watched, however. That smooth operator, Curly Pi, was lurking innerproduct. As his eyes devoured her curvilinear coordinates, a singular expression crossed his face. He wondered, was she still convergent? He decided to integrate improperly at once.

Hearing a common fraction behind her, Polly rotated and saw Curly Pi approaching with his power series extrapolated. She could see at once by his degenerate conic and dissipative terms that he was bent on no good.

"Ho, Ho," he said. "What a symmetric little asymptote you have. I can see your angles have lots of secs."

"Calm yourself, my dear," said our suave operator. "Your fears are purely imaginary."

"What order are you?" the brute demanded.

Curly leered, "I suppose you've never been operated on."

"Of course not," Polly replied quite properly, "I'm absolutely convergent!"

"Come, come," said Curly. "Let's off to a decimal place I know and I'll take you to the limit."

"Abscissa!!!" he swore, using the vilest oath he knew. His patience was gone. Coshing her over the coefficient with a natural log until she was powerless, Curly removed her discontinuities. He stared at her significant places, and began smoothing out her points of inflection. Poor Polly. The algoritmic method was now her only hope. She felt his hand tending toward her asymptotic limit. Her convergence would soon be gone forever.

There was no mercy, for Curly was a heavyside operator. Curly's radius squared itself; Polly's locii quivered. He integrated her by parts. He integrated her by fractions. After he cofactored, he performed Runge-Cutta on her. The complex beast even went all the way around and did a contour integration. Curly went on operating until he had satisfied her hypothesis. Then, he exponentiated and became completely orthogonal.

When Polly got home that night, her mother noticed that she was no longer piecewise continuous, but had been truncated in several places. But, it was too late to differentiate now. As the months went by, Polly's denominator increased monotonically. Finally, she went to L'Hopital and generated a small but pathological function which left surds all over the place and drove Polly to deviation.

The moral of the sad story is this:

"If you want to keep your expressions convergent, never allow them a single degree of freedom."

I was actually pretty good with a slide rule. Don't tell anybody.

I didn't mean it to come across that those adept with a slide rule were all nerds or a lower life form, but they all tended to be highly science and math oriented.

I ducked all but algebra, and never figured out a slide rule or Rubix Cube. In keeping with the spirit (if not the sophisticated humor) of the thread, did you hear about the constipated mathematician? He worked it out with a pencil...

Your school curriculum sounds similar to my own.

As for the Rubick's Cube, I worked outside the box (cube) with the application of a screwdriver.

Pop the scrambled pieces off and snap it all back together with all the colors on their own surfaces.

Your sliderule mascot is actually "Joe Miner", the mascot of the Missouri School of Mines & Metallurgy, later renamed to University of Missouri at Rolla, to the latest name Missouri University of Science & Technology. I'm an alumni.