Cletis and His Nekkid Valentine

Howdy, y'all. Yup, it be me, Cletis Clyde. I ain't stopped by this here blog what's writ by that feller Hale McKay in a coon's age, so I thought iffin I might, I mebbe shud visit y'all fer a spell.

Say, last week was Sane Valentine Day. Did any y'all get lucky? All those guys wiff smirks on they's faces sure enuff did. I gotta scratch my head 'bout that coz I dunno why they's a-smirkin' fer.

Ain't they smart enuff to knows that's prosecution? Hell, you mighta bought that gal some candy or flowers so's she wud get all sweet on ya. But they way I sees it, you done paid fer it, the only diff'rence is you gave the money to the person what wuz a-sellin' the candy or the flowers. That wud make them yer pimps!

My kid sister done got herself arrested fer prosecution the udder day. They wuz only one problem she wuz a-tryin' to sell somethin' what nobody else wanted nuffin' to do wiff. She went an' got herself one of dem slick banisters, that's a fancy $2-word what means the same as lawyer.

Anyways, he done went and got her off in exchange fer his fee. The police locked her up anyway after they went and took her fingerprints. She kept screamin' fer them cops to give 'em back coz they belonged to her. As things turned out, the Judge let her off on account she didn't make any money coz she wuz so butt ugly no one wud pay fer it anyway.

I had a purty strange Valentine Day myself. It started out when I went downtown to one of dem lonely hearts clubs. You know, dem clubs what has signs that say things like Live Dancin' and All Nude Revue. 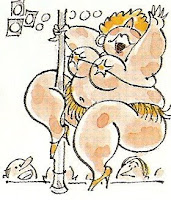 The girls what dance in those places are right friendly too, providin' you got a fistful of dollar bills. Lemme give y'all a piece of advice iffin you plan on goin' to a place like that. Never go in there wiff $5 dollar bills, coz them girls, they's not likely to make change fer ya.

That night they had this one dancer what wuz no stranger to a box of Twinkies. She wuz a dancin' 'round a pole what looked like them ones down at the firehouse, ceptin' they wuz no hole in the ceiling. When she put her weight on that pole it was a bendin' and Lawd A'mighty, I thought the whole roof wuz a gonna fall in. You might say she almost brought the house down.

Purty soon I noticed that all the udder fellers what wuz gathered 'round the stage wuzn't payin' no never mind to her. I reckon they wuzn't much excited when it comes to full-figgered women folk, either that or they didn't have any flour on 'em. (Iffin you don't knows, don't ask.)

Well, there I wuz wiff my elbows on the stage and a wad of dollar bills in my hand. It didn't take her none too long to see that in addition to no scruples, I had none too good of a taste either. Sure enuff, she wuz a spendin' most of her routine right in front of me. Rolls of her flesh wuz a-creepin' in and out of her skimpy costume. I looked up at her and thought, "Acres and acres of love and it's all mine."

Looking somethin' like the Michelin Tire Man in a G-string and pasties I started wond'rin' what she might look like with clothes on. I kept on a tuckin' them dollar bills in her garter belts and waistband and a few places what weren't covered fer some time. I kept at it until I done run plum out of foldin' money. I did have some quarters in my pocket, but I thought it weren't a very good idea.

Well, she wuz 'bout to walk away to drum up some other bizness, but then I remembered I had another roll of money. Only thing wuz, that money wuz money I had done tucked in my drawers. (Iffin you don't knows, don't ask.)

Coz I was still bein' so generous, I think that girl wuz a-developin' a crush on me. Next thing I knows she's a askin' me iffin I wud like a private lap dance! I took one look at the places that wud turn into a lap iffin she wuz a-sittin' and I asked her if she wanted me to do a jig or the achy-breaky.

Well, before we were able to work out some other conjungle arrangements, all of a sudden all hell broke loose! The next thing I knows, a couple of big ol' boys what was bein' paid as bouncers wuz a wrasslin' me from my seat. They wuz a cussin' and raisin' cane and tellin' me my money wuz no good.

I tried to make 'em lissen to what I wuz, that I wuz rich and that I wuz into real estate big time. I told them I owned property and some houses and that I even owned a hotel.

Well, they jest laughed and the next thing I knows they's a-carryin' me right out the front door. Then they throwed me ass over teakettle right out yonder onto the gravel in the parkin' lot. My dress-up bib britches and my Sunday go-to-church flannel shirt got all ripped.

Next thing I knows they's a throwin' all my dollar bills I'd been a-spendin' in there out on the sidewalk. Then they's commenced to cussin' and tellin' not to ever come back there again or else they would call the cops. Then anudder man what wuz the owner of the place said somethin' really stupid to me.

He said, "Son do you think we wuz gonna let you get away wiff passin' out play money in this fine establishment?" Then said somethin' else, somethin' that made me feel sad. He said, "You insulted poor Bambi. She's in there bawlin' her eyes out coz you wuz givin' her Monopoly money. She thought she made enuff money offin you to pay for a bikini waxin' tomorrow."

Well folks, I gathered up my money what I could find and told him that he'd never see my face in there again. Nope, coz next Friday is pay day and I'm gonna buy a fake beard and some hair colorin' stuff so's I'll have a different face. They's gonna have to get up awful early in the mornin' to outsmart Cletis Clyde. Yes sir.

I walked away and I was troubled by a couple of things. Bambi? Bikini waxin'?

Iffin y'all see that Hale McKay character tell him I dropped in and left a few words of wisdom 'bout women, love and sex.

I have an uncle named Cletis and this piece reminds me of him quite a bit. Bwahahahahahaha.

The Cletis character reminds me of three or four of my uncles on my father's side and one on my mother's side of the family.