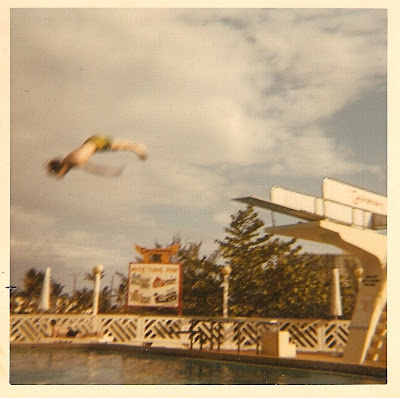 Up in the sky.

Is it a plane?

And it's not
Superman either!

A recent newly wed groom showing off to his new wife on their honeymoon? 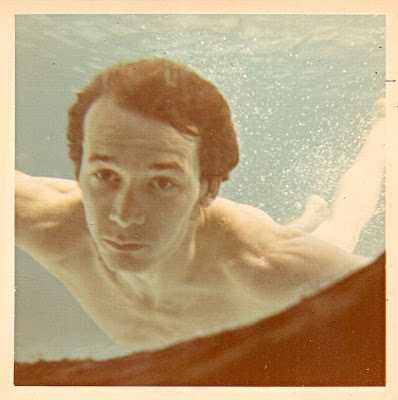 The Man From Atlantis?

The diver above searching for his trunks that came off when he hit the water?

No. The trunks would come off later. ☺

Yes. That's me in those two pictures while we were staying at The Cataways on Collins Ave. in Miami on our honeymoon in May of 1972. The second pic was shot by my wife in the underground barroom through an underwater porthole that looks out into the pool. I swam down to the porthole as if I were looking inside. I could not see inside, but I was clearly visible from within the bar.

If you haven't guessed by now, the pictures are serving as an introduction to some jokes. While on the subject, why not some Honeymoon jokes?

Olympic Honeymoon
A man met a beautiful lady and he decided he wanted to marry her right away. She protested, "But we don't know anything about each other."

He replied, "That's all right; we'll learn about each other as we go along."

So she consented, and they were married, and went on a honeymoon to a very nice resort.

One morning, they were lying by the pool when he got up off his towel, climbed up to the 10 meter board and did a two and a half tuck gainer, entering the water perfectly, almost without a ripple. This was followed by a three rotations in jackknife position before he again straightened out and cut the water like a knife. After a few more demonstrations, he came back and lay down on his towel.

She said, 'That was incredible!"

He said, "I used to be an Olympic diving champion. You see, I told you we'd learn more about ourselves as we went along."

So she got up, jumped in the pool and started doing laps. She was moving so fast that the froth from her pushing off at one end of the pool would hardly be gone before she was already touching the other end of the pool. She did laps in freestyle, breast stroke, even butterfly! After about thirty laps, completed in mere minutes, she climbed back out and lay down on her towel, barely breathing hard.

He said, "That was incredible! Were you an Olympic endurance swimmer?"

"No, she said, 'I was a hooker in Venice and I worked both sides of the canal."

Stir the Pasta
Maria just got married, and being a traditional Catholic Italian, she was still a virgin. So, on her wedding night, staying at her mother's house, she was quite understandably nervous.

However, her mother reassured her. "Don't worry, Maria. Tony's a good man. I cook pasta. You go upstairs, and he'll take care of you." So up she went. When she got upstairs, Tony took off his shirt and exposed his hairy chest.

Maria ran downstairs to her mother and says, "Mama, Mama, Tony's got a big hairy chest!"

"Don't worry, Maria," says the mother, "All good men have hairy chests. I cook the pasta. You go upstairs. He'll take good care of you."

"Don't worry, Maria. All good men have hairy legs. Tony's a good man. I cook the pasta. You go upstairs, and he'll take good care of you."

So, up our poor Maria went again. When she got up there, the patient (?!?) groom Tony took off his socks, and on his left foot he was missing three toes.

When Maria saw this, she ran downstairs. "Mama, Mama, Tony's got a foot and a half!"

"Step aside," said the mother, "YOU stay here, and stir the pasta. I'm going upstairs. This job is for Mama!"

Bird's Eye View
When Casey stated he was getting married, his pet parrot was very upset & insisted on going on the honeymoon with the couple. "Okay, okay", his owner agreed to the bird, "You can come along, but I don't want you looking. You gotta promise that you'll look the other way when we're making love...and if you break your promise, you'll get nothing to eat!"

Not wanting to be left at home, the parrot readily agreed.

Before leaving on their honeymoon, Casey & his new bride were packing their suitcases, the man, out of breath, says to his wife, "I can't get it all in honey, you'll have to sit on it."

"No that's not gonna work, why don't we both get on top?"

It's then that the parrot thinks to himself, "Food or no food...this I GOTTA see!"

The Kneasels
A young couple left the church and arrived at the hotel where they were spending the first night of their honeymoon. They opened the champagne and began undressing.

When the bridegroom removed His socks, His new wife asked, "Ewww - what`s wrong with your feet? Your toes look all mangled and weird. Why are your feet so gross?"

"I had tolio as a child," he answered.

"You mean polio?" she asked.

"No, tolio. The disease only affected my toes."

The bride was satisfied with this explanation, and they continued undressing. When the groom took off His pants, his bride once again wrinkled up Her nose. "What`s wrong with your knees?" She asked. "They`re all lumpy and deformed!"

"As a child, I also had kneasles," he explained.

"You mean measles?" she asked.

"No, kneasles. It was a strange illness that only affected my knees."

The new bride had to be satisfied with this answer. As the undressing continued, Her husband at last removed His underwear.

Deaf Newlyweds
Two deaf people get married. During the first week of marriage, they find that they are unable to communicate in the bedroom when they turn off the lights because they can't see each other using sign language.

After several nights of fumbling around and various misunderstandings, the wife decides to find a solution. "Honey," she signs, "Why don't we agree on some simple signals? For instance, at night, if you want to have sex with me, reach over and squeeze my left breast one time. If you don't want to have sex, reach over and squeeze my right breast one time."

'I was a hooker in Venice and I worked both sides of the canal." was the funniest until, " If you don't want to have sex, reach over and pull on my penis fifty times."

A man and woman of differing faiths married, and went on their honeymoon. Later that wedding night, she emerges from the bathroom, ready and rarin' to go...and sees him on the bed, in pjs and a full-length robe, reading. She gives him a shocked look and a "what's with this?"

He drops the paper, glances at her, and says in a calm, conversational voice, "I'm sorry, it's Lent".

She burst into tears and cried, "to whom and for how long?"

What a handsome devil too.

Loved them all but the smallpox one had me spewing water all over the monitor.

Handsome devil...Why thank you. Ah, to be that young again.

On Take Free Bitcoin you can recieve free satoshis. Up to 22 satoshis every 5 minutes.