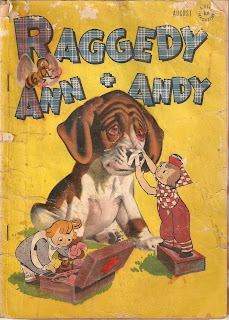 It is not often that I come in contact with material objects that predate my own existence. That is especially true of a comic book!

Consider the image at the left. (click the image for enlarged view) It was published by Dell Comics in August of 1947. I was born six and a half months after its publication. All arguments aside regarding whether or not I was in existence in my then embryonic state, the item does predate my departure from the womb.

I acquired this comic book while performing the simple task of carrying out trash from a woman's closet. It and the following scanned images of other comic books were in a box of what she deemed to be trash.

I googled the title and found an issue from the same year on eBay offered at $31. This one, however, is comparatively poor condition and would fetch considerably less than that figure.

Until I saved it, I never knew there ever was Raggedy Ann & Andy comics published. 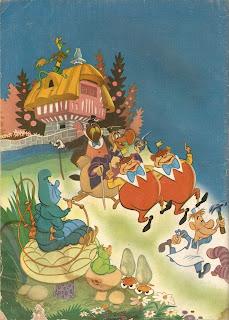 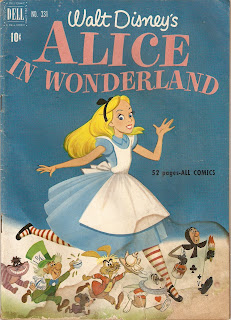 Alice in Wonderland -1951. This issue had a wrap-around cover. (note: 52 pages and 10 cents) I had forgotten but it is interesting to learn that advertisements in comic books those days were found only on the inside covers and back covers. This one is stained and has a few small tears.

Charley McCarthy - 1952. I am old enough to remember Edgar Bergen and his dummies from television. Pictured on the cover of this issue is Charlie and Mortimer Snerd. Like the "Raggedys," I was unaware that this comic was ever published.

Little Lulu - 1952. I do remember her comic books because my two sisters used to read them, but of course that was some time after 1952. The cover at the far left is belatedly appropriate for the recent passing of the St. Valentine's Day celebration. 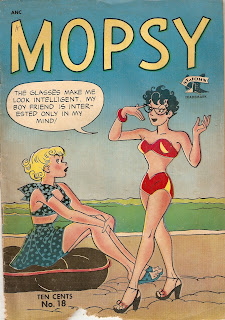 Mopsy - 1953. This is another one I never heard of. After a little browsing I learned that Mopsy began as a single panel comic strip Gladys Parker in 1939 and by the end of WWII was syndicated in 300 newspapers.

The comic book was first published in 1947 and ran through September of 1953. Gladys Parker retired in 1965, and the character Mopsy disappeared from all publications. Parker died the following year at the age of 56.

(To the left is a sample page from inside this issue.) - You can see the damage to the book at its bottom. No doubt some hungry mouse sampled the pulp paper and ate all the way through.

Peter Pig - 1953. (far right) This is still another comic book and character I don't recall.

Captain Gallant of the Foreign Legion - 1955. I don't remember ever seeing the comic book, but I remember well the television series. There was only one issue of the comic book ever published and it was sponsored by the H.J. Heinz Company, which also sponsored the black and white TV program.

Captain Michael Gallant was portrayed by Buster Crabbe. Crabbe is the only actor to have played all three of the characters: Tarzan, Flash Gordon and Buck Rogers on the big screen or television. His real-life son Cullen, played Cuffy Sanders for whom Capt. Gallant provided a father figure.The program also starred Fuzzy Knight as himself to provide comic relief.

Treasures or trash? None of them seem to have much value to collectors in mint condition, and as they are in less than a pristine state, they virtually worthless.

I guess it's true what they say, one man's trash is another man's treasure. I sealed them in non-acidic bags and put them away for another day.

I remember or have heard of about half of them. If nothing else, you have a nice little collection of nostalgia to a history-bound generation ;)

I definitely remember Little Lulu, which was one of my favorites, and Mopsy. I probably saw the rest of them, but they don't stand out in my memory. I always read Archie, and a few others I can't remember right now. You were lucky to have found those!!

I am almost sure that I read Mopsy. After all, like her boyfriend, I was interested in her intelligence and the serious way she dealt with her life. chortle.

I am familiar with almost all of them. Thanks for sharing.

Most of these I've never even heard of. How cool you have them though. If they are in good shape they are indeed worth some bucks.

It was nostalgic to see what you got for a dime back then. Also seeing no ads within the pulp pages was a treat.

It looks like Mopsy was ahead of the curve when it came to being a dependent woman.

Weren't we all interested in women's intelligence back then as now? ;0}

Unfortunately none of them are in real good shape. I'm afraid they wouldn't fetch very much. With all of them over 50 years old, who knows, with each passing decade their rarity might increase their value.