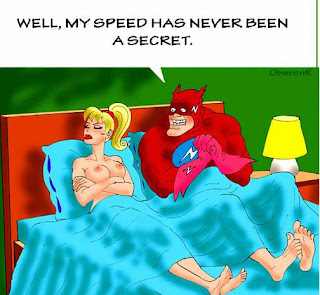 Super Jerk
Two guys were sitting at a bar on the 40th floor of a skyscraper and were totally plastered.

The first guy said, ''Hey, I'll bet you a million bucks that I can jump out of this window, fly around the building, and land right here next to you!''

Being so totally wasted, plus hearing a completely impossible bet, the 2nd guy replied, ''YOU'RE ON!''

So the first guy jumped out of the window, flew around the building, and came right back to the same spot.

So the first guy jumped out of the window, flew around the building, and landed right next to his friend.
''That is remarkable. Do it one more time!"

The second man agreed, and with that, once again, the first jumped out, flew around, and came back.

The much pumped second man, took a deep breath, and heaved his body out the window. He fell straight to the ground and died instantly upon impact. Calmly the first man walked back to the bar and ordered another beer.

The bartender remarked, ''You sure are a real asshole when you're drunk, Superman!'''

Sex on the Fly
Superman's had a hard week of fighting crime in Metropolis and is ready for some fun.

So Friday afternoon, he looks up his pals Batman and Spiderman to see if they're up for going on the prowl that evening. Both turn him down on account of prior commitments, and Superman is pretty ticked.

As he's flying around the stratosphere letting off steam, he spots Wonder Woman lying on her back stark naked sunbathing on the beach.

"Hey," he thinks, "I'm Superman and I don't need those two clowns to have a good time. I can just fly down there at the speed of light, catch a quickie, and fly away before she knows what happened."

So, Superman zips down, takes advantage of the situation and flies away at the speed of light.

Wonder Woman says, "What the hell was that?"

The Invisible Man cries out in obvious pain, "I don't know but my asshole is killing me !" 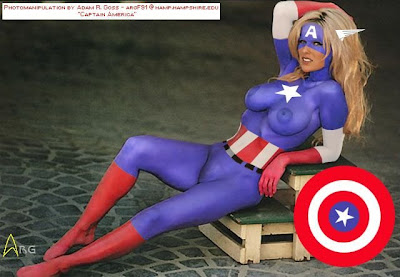 Talk about a tight fitting costume! 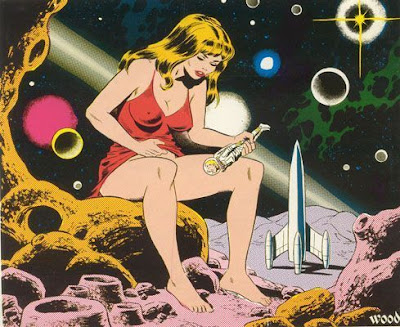 Is About...
To Boldly Go Where No Man Has Gone Before !
№ 1726
Curmudgeon responsible for this post: Hale McKay at 7:51 PM

Truth, Justice and the American way hardly seem secure with this cast of Superheroes.

Woooo Hoooo! Ben and Susan are returning. I'll be right here when they do. Woooo Hooo! You've made my day.

Have a terrific rest of the week. :)

Remind me not to visit bars frequented by alcoholic superheroes.

The Invisible Man got it the end.

And above all, never make bets with them.