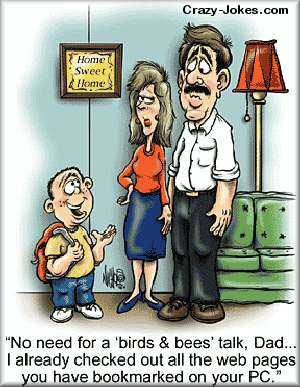 Sex Codes
A husband and wife decided they needed to use "code" to indicate that they wanted to have sex without letting their children in on it. They decided on the word Typewriter.

One day the husband told his five year old daughter, "Go tell your mommy that daddy needs to type a letter".

The child told her mother what her dad said, and her mom responded, "Tell your daddy that he can't type a letter right now cause there is a red ribbon in the typewriter." The child went back to tell her father what mommy said.

A few days later the mom told the daughter, "Tell daddy that he can type that letter now."

The child told her father, returned to her mother and announced, "Daddy said never mind with the typewriter, he already wrote the letter by hand."

Little Johnny is in Love
The pretty teacher was concerned with one of her eleven-year-old students. Taking him aside after class one day,she asked, "Little Johnny, why has your school work been so poor lately?"

"But Johnny," she said gently, "don't you see how silly that is? It's true that I would like a husband of my own someday. But I don't want a child."

No person really decides before they grow up who they're going to marry. God decides it all way before, and you get to find out later who you're stuck with.
- Kirsten, age 10

What is the Right Age To Get Married?

Twenty-three is the best age because you know the person FOREVER by then.
- Camille, age 10

How Can A Stranger Tell If Two People Are Married?

You might have to guess, based on whether they seem to be yelling at the same kids.
- Derrick, age 8

What Do Your Think Your Mom and Dad Have In Common?

What Do Most People Do On A Date?

Dates are for having fun, and people should use them to get to know each other. Even boys have something to say if you listen long enough.
- Lynnette, age 8

On the first date, they just tell each other lies, and that usually gets them interested enough to go for a second date.
- Martin, age 10

What Would You Do On A First Date That Was Turning Sour?

I'd run home and play dead. The next day I would call all the newspapers and make sure they wrote about me in all the dead columns.
- Craig, age 9

When Is It Okay To Kiss Someone?

The law says you have to be eighteen, so I wouldn't want to mess with that.
- Curt, age 7

The rule goes like this: If you kiss someone, then you should marry them & have kids with them. It's the right thing to do.
- Howard, age 8

Is It Better To Be Single or Married?

It's better for girls to be single but not for boys. Boys need someone to clean up after them.
- Anita, age 9

How Would The World Be Different If People Didn't Get Married?

There sure would be a lot of kids to explain, wouldn't there?
- Kelvin, age 8

How Would You Make a Marriage Work?

Tell your wife that she looks pretty even if she looks like a truck. 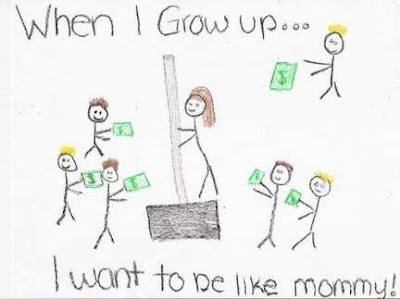 Why parents should always check their children's homework before they hand it in:

A first grade girl handed in the drawing, enclosed here, for a homework assignment.


After it was graded and the child brought it home, she returned to school the next day with the following note:

I want to be very clear on my child's illustration. It is NOT of me on a dance pole on a stage in a strip joint. I work at Home Depot and had commented to my daughter how much money we made in the recent snowstorm. This photo is of me selling a shovel.

Some children's pictures do need some explanation. LMAO

That last piece concerning the kid's drawing was very funny.

I didn't "see" a stripper on a dancer's pole" when I first viewed the picture. I didn't see someone selling shovels either.

I saw a politician getting his/her palms greased.

The Little Johnny one made me spew coffee all over my monitor. Thanks.

Little Johnny has that affect on everyone.

Yep. Little Johnny may live in infamy but he's famous for his antics and mouth.