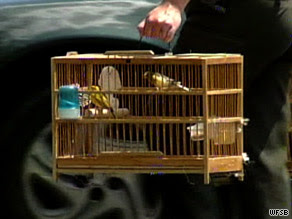 In addition to the 150 birds -- mainly saffron finches -- police seized their cages and $8,000 in cash from a home in Shelton, said police Sgt. Robert Kozlowsky.

The 19 people, all originally from Brazil, are being charged with animal cruelty and illegal gambling, Kozlowsky said. The homeowner, Jurames Goulart, 42, was additionally charged with interfering with officers.

Shelton Police say they've never seen or heard of this kind of bird fighting before.

"This is new to us," Kozlowsky told CNN. "Finches are much easier to keep under the radar than roosters because they make less noise and they wouldn't arouse suspicions if someone had a lot of them."

Kozlowsky said police obtained a search warrant after a monthlong investigation and raided the home after receiving tips that an illegal fight was scheduled to take place.

Wayne Kasacek of the Connecticut Department of Agriculture, which helped remove the birds, said that at least four of the finches have eye injuries.

In the photograph at the right, Charles Atlas Canary, III, can be seen with disheveled tail feathers and wearing a cast on his broken leg. The injuries were the result of a recent steel cage fight which was televised as a pay-for-view event in Brazil.

When asked of his injuries, Charles claimed that they were minor injuries. Said Charlie, "Mere flesh wounds."

One reported asked, "How was it you were injured?"

"It was freak accident - I slipped. My f**king opponent was afraid of me and shit himself right in the ring. I stepped right in his guano pile and fell ass over teakettle," Charlie snapped. "I don't know what the dude had for dinner before our bout, but it must've gone right through him!"

Pressed by reporters as to why he would allow himself to be forced into such a violent and brutal sport as bird fighting, the fighting canary took umbrage at their questions and smashed one photographer's equipment.

"Hey!" shouted the yellow bird, "We're not forced into fighting. It's a job and a well paying job too!"

"Is it because of the state of the economy," asked another reporter, "that you choose to fight."

"Hellllll-o! Do you know how expensive canary seeds and sesame seeds are nowadays? Look, I've got six unhatched nestlings at home and another half dozen one-year-olds still living at home mooching off of me and the old lady. Seven of them want to take singing lessons. I don't suppose you know how much singing coaches get per hour, do you?" 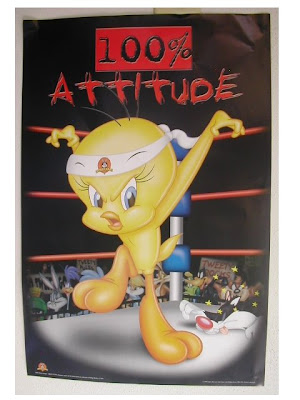 Talking With the Champ
In a separate interview at his Hollywood mansion, Tweety Bird the reigning World Champion canary fighter and former Warner Brothers star, expressed disdain for the recent police raids.

Standing next to his best-selling poster and championship trophies, the undefeated (53-0) bird said, "Wook, fighting other canaries and finches can be the only way for us birds to get ahead and to get out of the ghetto pet shops."

When asked why he no longer toured the canary fighting circuits, he replied, "I've been wucky. I got a contwact to fight in exhibition matches. I fight puddy tats now. It's a wucwative deal that pays a wot. ...And I wuv to make the puddy tats fall down and go BOOM!"

Sylvester Speaks Up
Tracked down in a Hollywood back lot alley scrummaging through trash cans for something to eat, Sylvester the Cat was hesitant to discuss long time nemesis Tweety Bird.

"To quote my friend Daffy Duck, Thufferin' Thucotash! I think that muscle bound bird is on f**king steroids! Look at how big his head is in relation to the rest of his body. I'll bet he has shrunken testicles too! And I think that old bitch Granny is his supplier!"

He looked around to make sure no one was eavesdropping, especially Tweety, and said, "I for one, think the cops are doing the right thing. It's barbaric for birds to be fighting. I say all those birds should be let loose. Open their cages and let them fly free."

Asked a reporter, "Wouldn't that make all those birds flying around easy prey for you and your feline friends?"

"Sure. Sure it would. We cats have to eat, don't we? We have families to feed too! I figure I can eat enough of them feathered feasts to gain my strength again. With a full belly I'll find that asshole Tweety and kick his yellow ass all over these back alleys."

When informed that Tweety was seen walking in his direction Sylvester began to tremble. He told us the interview was over. He had something else to do. He tripped over the trash barrel and scrambled to his feet.

Bwahahahahahaha. You need to make a movie out of this. Just saying.

I think Michael Vick is behind the canary fighting ;-)

A movie, eh? How about a redo on the song "Kung Fu Fighting" for the theme on the soundtrack?

Everybody was Canary fighting...

Funny you should mention Vick. While I was writing this, I was thinking about incorporating Michael Vick somehow into the post.

You have the seeds of the formation of the WBWE here (World Bird Wrestling Entertainment).

I've never commented before, but I've been reading your stuff for a while now. Just thought you'd like to know you have lurkers. Great post. Love this stuff. =)

Yup, I saw what you did there. LOL!

WBWE - hmmm - it could also be Warner Brothers Wrestling Entertainment.

Thank you so much for "breaking your silence" as a lurker.

It's nice to know when people like your "stuff."

The other positive about breaking your lurker status, is that it provides me with a link to you - so that i might come and visit your site as well. AND I will.