And On the Sabbath, We Laughed 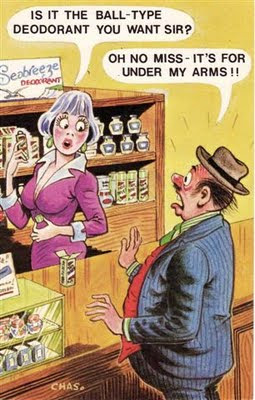 Buffy's Western Trip
Prior to her trip to The South West, Buffy (a New Yorker) confided to her co-workers she had three goals for her trip..

1. She wanted to taste some real Bar-B-Que.

3. She wanted to have sex with a real cowboy.

Upon her return, the girls were curious as to how she fared.

"Let me tell you, they have a tree down there called a Mesquite and when they slow cook that brisket over that Mesquite, it's ooooh so good. The taste is unbelievable!"

"And I went to a real rodeo. Talk about athletes! Those guys wrestle full grown bulls! They ride horses at a full gallop, then jump off the horses and grab the bull by the horns and throw them to the ground! It is just incredible!"

They then asked, "Well tell us, did you have sex with a real cowboy?"

"Are you kidding? When I saw the outline of the condom they carry in the back pocket of their jeans, I changed my mind!"

A man doing market research knocked on a door and was greeted by a young woman with three small children running around at her feet.

He says, "I'm doing research for Vaseline. Have you ever used the product?"

She says, "Yes. My husband and I use it all the time."

"And if you don't mind me asking, what do you use it for?"

"We use it for sex," she replied candidly.

The researcher was a little taken back. "Usually people lie to me and say that they use it on a child's bicycle chain or to help with a gate hinge. But, in fact, I know that most people do use it for sex. I admire you for your honesty. Since you've been frank so far, can you tell me exactly how you use it for sex?"

The woman says, "I don't mind telling you at all, my husband and I put it on the door knob and it keeps the kids out."

Indian head dress
While touring an Indian reservation in North Dakota filming a documentary, Barbara Walters was puzzled as to why the difference in the number of feathers in the head dresses.

So, she asked a brave who only had one feather in his head dress.

His reply was: "Only have one woman. One woman, one feather."

Feeling the first fellow was only joking she asked another brave.

This brave had two feathers in his headdress. And he replied: "Me have two women. Two women,two feathers."

Still not convinced the feathers indicated the number of sexual partners involved, she decided to interview the Chief. Now the Chief had a head dress full of feathers, which, needless to say, amused Ms. Walters.

She asked the Chief,"Why do you have so many feathers in your head dress?"

Horrified, Ms. Walters stated, "You ought to be hung."

Ms. Walters cried, "You don't have to be so hostile!"

With tears in her eyes, Ms. Walters cried, "Oh dear."

The Chief said: "No deer. Ass too high, run too fast."

Thanks. I really liked these jokes - even if I did "borrow" them.