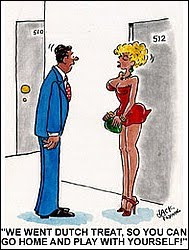 Q: Is it wrong to have sex before you're married?
A: Only if it makes you late for the ceremony.

A man told his blonde girlfriend that sex might be more exciting if she got a Brazilian.
Now she's sleeping with a guy named Paulo.

To help weather the international financial crisis, husbands are saving money by having sex with their wives.
□ □ □ □
A new guy in town was chatting with his neighbor when they saw two women walking toward them.

"Shit," the new guy said. "Here comes my wife, and she's with the woman I've just starting screwing on the side. I'd better hide."

"Damn," the neighbor said, "You took the words right out of my mouth."
□ □ □ □ 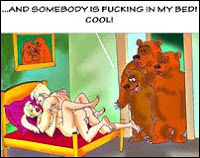 "You used to be the life of the party in the old days," reminisced one buddy to another. "Does your wife still find you entertaining after seven years of marriage?"

□ □ □ □
A man bought a woman a couple of drinks in a bar and asked if she would like to go to his apartment to continue talking.

When they entered his apartment she reminded him, "Don't waste your time with any fancy moves."

□ □ □ □
A man was reading the newspaper during breakfast and said to his wife, "Look at this. Another beautiful actress is going to marry a baseball player who's a total dope! I'll never understand why the biggest jerks get the hottest wives."

His wife said, "Thank you." 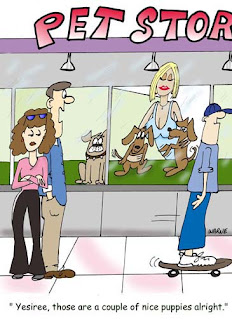 Two business men were sitting in a bar and one was complaining about his new live-in girlfriend.

"I'm telling you," the first said, "I've had it with her. She keeps bring her work home night after night. I'm really considering ending the relationship. I can't take it anymore!"

"Well," the second man said, "I can see how that would be annoying. But having a girl who's interested in her career isn't a reason to break up."

The first man replied, "It is if your girlfriend's a hooker."

Bwahahahahahaha. Another set of wonderful laughs. Great way to start my day. Thanks.

Sex reasons to visit It Occurred To Me ;)

Pinch away - Like Sandee, I'm not adverse to pinching jokes from you. Turn about is fair play.

Thanks, glad you got a laugh out of them.

However many reasons - glad to see the comments and visit.

Only if it makes you late for the ceremony.

You had me after that line.

I will remember not to tell my wife to get a Brazillian!

Hey, it's a good line - at least to start out a post of jokes.

I think that's a good idea.

I needed a good laugh this morning.

It's good to hear from you. I'm glad to accommodate you.