I find it interesting, although not surprising, that most comedians have taken the low road when it comes to using our President as subject matter of their jokes. It's almost as if he's been declared "persona non jokis". (Don't believe me? Just try Googling to find to find some good funny jokes rendered at the expense of our present Commander-in-Chief!)

Even good "stand-alone" caricatures are at a premium! Are the cartoonists afraid to poke some fun at the current tenant at 1600 Pennsylvania Ave?

Fortunately, the editorial cartoonists have not sold out! Just like Presidents of the past, these guys know that anyone who sits in the Oval Office is fair game. 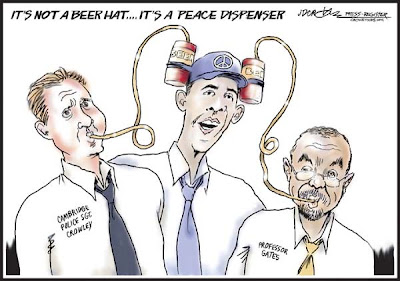 Some members of the press stopped shaking in their boots long enough to label Obama's recent meeting with Sgt. Crowley and Prof. Gates as a "Beer Summit." Other members of the press chose to suggest what brand of beer, befitting each man's personality, was going to be served.

This Blogger is prepared to go where other Bloggers did not venture. I'll report on some of the events that occurred before, during and after that beer fest on the White House lawn that they chose to ignore. They had their reasons. I have mine. :O} 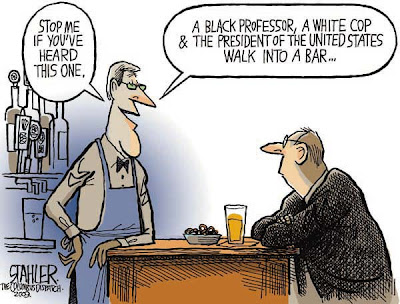 Before I start - Here's an editorial cartoon that's also a joke! (Good stuff!)

It took the group (Obama, Gates, Crowley and Biden) only 45 minutes to sing all of the stanzas of "99 Bottles of Beer".

Crowley and Gates got into a fist fight: each shouting respectively, "Tastes Great!" and "Less Filling!"

Although not in the best of health, Senator Ted Kennedy said he wouldn't come to the party unless he was named the designated driver.

Congress members have refused to meet with the President in the future unless he makes it a kegger!

Bill Clinton refused to attend because there was not going to be a wet tee-shirt contest for entertainment.

Meanwhile, Bill Clinton was busy raising the bar for the Mile High Club membership qualifications on a recent flight from North Korea. 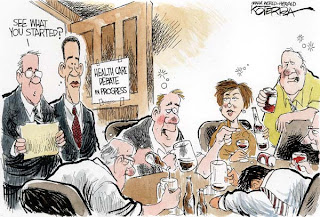 It was discovered halfway through their beers that the President's first name sounds just like a loud beer belch. ( Ba-raaaack!)

His best one: "Your Obama is so dumb he thinks peanuts come from castrated peacocks." (I'm still laughing over that one.) ;O}

The beer summit got off to a rocky start when Professor Gates cited his favorite line from the movie "Blazing Saddles," by shouting, "Where the white women at?"

That overweight truck driver for the Miller Brewing Company showed up to confiscate all the Miller Lite Beer by announcing, "You can't have a common-sense beer in a place where there's no common sense."

After the beer summit reporters gathered to ask the President about some of his apparently lesser important issues, such as his Health Care bill, the war in Iraq and North Korea's nuclear weapons.

One reporter asked about his appointment of Sonia Sotomayor to the Supreme Court.

He claimed that she was not the choice he wanted and that they didn't understand what he said.

"I was eating a hot dog at the time, and I like to sing that jingle when I eat wieners. I'd like to be an Oscar Meyer wiener ... that's what I'd like to be."

The reporter looked stumped and said, "What?"

There you have it! This is one Blogger who's not afraid it lay it on the line!

President Bush was the but of many a comedians routine as well.It the national past time bash the president.

Yes, Bush was the butt of jokes.

I guess it really started with Bill "Bubba" Clinton. Bush was the perfect foil to follow ...

So far Obama hasn't been as forthcoming with the fodder for the comedians as Bush - but he's working on it.

Yep, Bush was easy prey for the comedians and joke tellers.

You're right, the "Beer Summit" was set by Obama himself.

You liked that joke too! LOL!

Just proves that Washington DC is pretty much a joke. It certainly is. Good stuff. :)

Yep, D.C. can be a joke - all it takes is the right punchline.

There may never be another Bush, we live in hope, perhaps Obama is trying to bring some sanity back to the White House.

Never another Bush? In a way, especially from the perspective of humorists, that is almost ... sad.

I think Obama, in spite of himself, will make some more contributions to the joke files. The "beer summit" is just an example.

As for sanity - that remains to be seen.

Obama has the good comedy picture that anyone who uses facebook knows that "Not bad" picture of Obama.